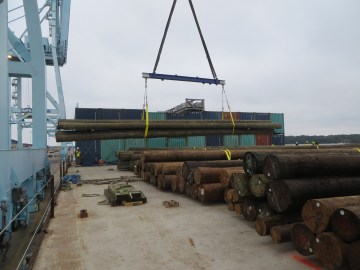 Crowley Maritime Corp. is transporting the initial batch of what will total 32,000 utility poles from the U.S. mainland to Puerto Rico to help restore the island’s power grid in the aftermath of Hurricane Maria. The weekly shipments will consist of 35-, 40- and 70-foot wooden, concrete and galvanized steel poles, sailing aboard multiple flat deck barges. A second series of shipments is also in development and will eventually bring the project total to between 65,000-70,000 poles.

This breakbulk shipment marks the latest in a multitude of response shipments carried out by Crowley since the storm hit.  The company has provided a constant transportation and logistics pipeline of both commercial and government relief cargo that has included 3,684 Federal Emergency Management Agency (FEMA) and 9,116 commercial loads since the storm, including 2,090 containers in in the last week alone. Crowley has bookings to transport another 2,500 relief loads to Puerto Rico in the next several weeks – a significant effort spanning more than 40 vessel sailings to date.

“The people of Puerto Rico are steadily rebuilding their infrastructure, and we are adding capacity and services to assist them,” said Frank Larkin, senior vice president and general manager, logistics and commercial services.  “As the supply chain mission changes, in this case to include breakbulk utility poles, our focus adapts to provide the logistics solutions to fulfill the needs of our government and commercial customers.”

“To accommodate the influx of additional cargo overall, the company has added seven U.S.-flagged, flat-deck barges to its fleet dedicated to Puerto Rico – a 67 percent increase in capacity –  offering a sailing virtually every day from the U.S. mainland,” said John Hourihan, senior vice president and general manager, Puerto Rico services. “With this additional vessel capacity, Crowley will be offering 6,200 commercial cargo slots per month in November and December in addition to continued relief cargo efforts.”

Upon reaching Puerto Rico, relief cargo is being distributed by Crowley Logistics, which has more than 375 trucks on the island. The logistics group is also providing services such as drayage, direct deliveries, deconsolidation and inventory control, as well as providing forklift equipment and operators to expedite the handling of air freight at the airport.

Crowley, which has about 300 Puerto Rico employees, has served the market since 1954, longer than any other Jones Act carrier in the trade.