In 1892, my grandfather, Thomas Crowley, bought a Whitehall rowboat and went into business for himself shuttling personnel and supplies between the San Francisco waterfront and the tall sailing ships that would anchor in San Francisco Bay. From these humble beginnings grew the company we know today as Crowley Maritime Corporation. By taking a look back over these many years, we can better appreciate the work, sacrifice, and entrepreneurial spirit of those who came before us. 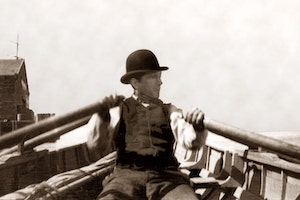 Within a few years, services broadened to include bay towing and ship assist services along with supply transport services for ships in the Bay. 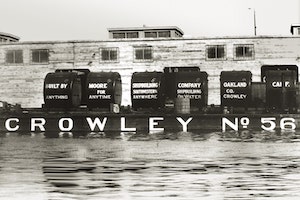 Crowley’s fleet played a significant role in ferrying passengers and their belongings out of San Francisco following the great earthquake.

Tugboats added to the fleet

A marine railway, a dock and a woodworking mill were built and named Crowley Shipyard. 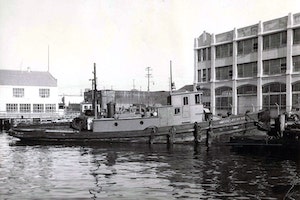 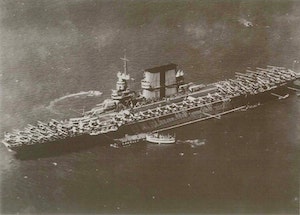 The entire vessel fleet underwent conversion from steam to diesel. 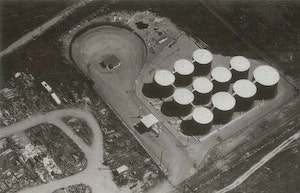 Seven, nine and 11,000 bbl. barges were designed for petroleum transport.

Oil barging equipment was purchased from Shell Oil for petroleum transport in both the Bay Area and Southern California.

Ships were built in-house for the government in support of World War II.

Crowley began to build and operate petroleum terminals to improve the efficiency of petroleum distribution. 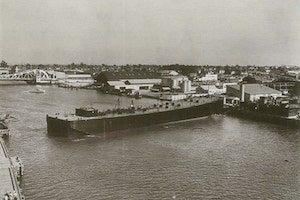 After the war, the company replaced all of its surviving steam tugs with war surplus diesel equipment.

The company towed the Oklahoma from Hawaii to Oakland after it was bombed at Pearl Harbor.

Crowley initiated its long commitment to arctic transportation with an agreement to resupply the U.S. Government’s distant early warning radar and communication system on the Alaska coastline. 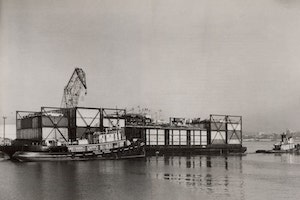 Regular container transportation services between Alaska and the lower 48 began.

Oil industry officials called on Crowley for the first Arctic sealift of oil industry cargo around the perimeter of Alaska to Prudhoe Bay. 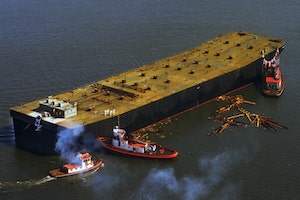 Crowley’s transport of 187,000 tons of cargo to Prudhoe Bay was the largest commercial sealift in maritime history.

A weekly roll on/roll (RO/RO) off cargo service was initiated between Miami and Jacksonville, Florida, and San Juan, Puerto Rico, and from the U.S. Gulf to Puerto Rico utilizing the world’s largest RO/RO barges, propelling Crowley to become the largest RO/RO carrier in the Caribbean trade.

25 Invader-class tugs and nine 450-series petroleum barges were added to the fleet. 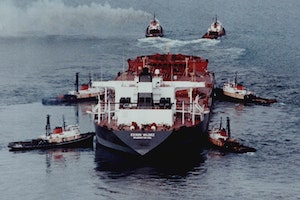 New terminals were constructed to handle the new triple-deck barges in Lake Charles, Louisiana and Petty’s Island near Philadelphia.

Five of the triple deck barges were stretched from 400-feet to 730-feet, increasing the capacity of each by 78 percent.

Crowley tugs were first on the scene of the Exxon Valdez grounding and the company was the principle contractor of equipment and personnel to provide marine support for the spill cleanup. 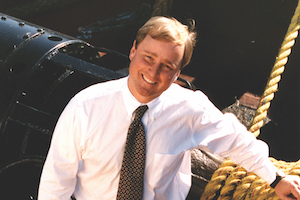 During the Persian Gulf Crisis, Crowley chartered three RO/RO vessels and a tug and barge to the U.S. Military Sealift Command in support of the United Nations’ various military transportation and supply services.

Crowley was the prime contractor for the Saudi Arabian Government in the first phase of an environmental cleanup of oil-polluted shores in the Persian Gulf.

Crowley played a leading role in the cleanup of the barge Morris J. Berman’s major oil spill off the beaches of San Juan, Puerto Rico.

Thomas B. Crowley, Jr., was unanimously elected as Chairman of the Board, President and CEO following the passing of his father.

Crowley made the first licensed commercial cargo delivery directly from the United States to Havana, Cuba in nearly 40 years. 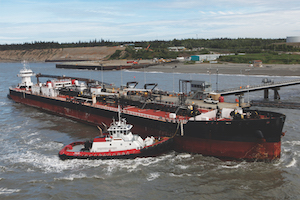 Tom Crowley, Jr., was awarded the coveted AOTOS Mariners Award for his lifetime of dedication and commitment to the maritime industry.

Crowley welcomed newly-built Articulated Tug Barges (ATB) to the fleet and continued the buildout of 17 vessels grouped into three classes 550, 650 and 750.

Crowley expanded into Sakhalin State, Russia, to support the oil and gas industry.

Crowley transported the first shipments in more than 40 years of livestock (cows, sheep and bison) from the U.S. to Cuba.

Crowley and TITAN Salvage responded to the devastating earthquake in Haiti, reestablishing cargo delivery in the port and reopening the port to other government and commercial traffic over a period of several weeks.

The fleet of company-owned CATCO® Arctic All-Terrain vehicles was sold. 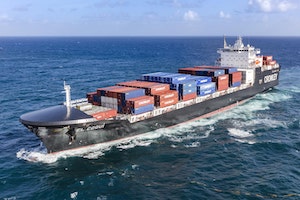 In 2018, Crowley Alaska Tankers, LLC, a subsidiary, completed the acquisition of three tankers from SeaRiver Maritime Inc., and chartered them back to SeaRiver under varying multi-year terms. The tankers California and Washington, have a capacity of 760,000 barrels and transport crude from Alaska to West Coast refineries. The tanker Oregon has a capacity of 342,000 barrels and transports refined petroleum between the U.S. Gulf and East Coast ports.

Two Men at the Helm

This book chronicles the company’s first 100 years from 1892-1992. It is based on the recollections of Thomas Bannon Crowley Sr., Chairman of the Board and Chief Executive Officer, and other long-time employees of Crowley Maritime Corporation.

All quotations cited in the text are from interviews with, or other recorded statements made by Mr. Crowley in the 1970s, 1980s, and 1990s. This book is free to read or download for offline use. Learn more about the Crowley family business and much more information. Thank you.

In 2013, Crowley Celebrates 60 Years of Service in Alaska

In 2013, Crowley celebrated its 60th anniversary of service to the people and businesses of Alaska. Over the years, Crowley has consistently provided unique solutions to Alaska’s logistics and marine transportation challenges. As Crowley reflects on its history of service in business development and protecting the Alaskan environment, it also sets its sights on another 60 years of growth and success.

50 Years in Central America: A Celebration of Leadership, Growth and Sustainability

2011 marks the 50th anniversary of ocean cargo transportation service between the U.S. and Central America for Crowley and its predecessor CCT. During this anniversary year, Crowley reflects on its history of faithful service to the people and ports of Central America and looks forward to the next 50 years of growth and opportunity. Thank you for stopping by and visiting our history page to view all the things we’ve done over the last 125 years.

2011 marks the 50th anniversary of naval architecture and marine engineering excellence for Jensen Maritime. For 50 years, Jensen has been a recognized leader in these fields, designing and modifying virtually every type of vessel and providing on-location marine consulting wherever needed. As Jensen reflects on its history of innovative design and service, it also sets its sights on another 50 years of growth and success.

60 Years of Service in Puerto Rico

In 2014, Crowley celebrated its 60th anniversary of service to the people and businesses of Puerto Rico. Through the years, Crowley has continuously served the needs of people shipping cargo between “La Isla del Encanto” Puerto Rico and the United States mainland. To learn more about these decades of success and prosperity in Puerto Rico, and Crowley’s future commitment to the Island, click here.

Crowley Maritime Corporation’s founder provides an oral history of his memories growing up and building a company on the San Francisco waterfront, in an interview conducted by Karl Kortum, founder of what is now the San Francisco Maritime National Historical Park, and Willa Klug Baum, internationally respected oral historian.

The digital version, housed at the University of California, Berkeley’s Bancroft Library, can be accessed here.

A look at the continued growth of Crowley Maritime Corporation from the perspective of Thomas B. Crowley, whose oral account takes off where his father’s left off in Recollections of the San Francisco Waterfront.

The digital version, housed at the University of California, Berkeley’s Bancroft Library, can be accessed here.