The Avik Class tug are designed for utilization with oil barges in the coastwise and river trades of Western Alaska. Their stern configuration shrouds the triple screw propellers in tunnels enabling these tugs to work at very shallow drafts. The bow hull form provides seakeeping qualities that allow these tugs to engage in ocean towing.
The tug features a raised bridge for clear visibility over containers stowed two high on the barge deck. A tow winch allows the boat to engage in coastal towing while fendered knees on the bow allow for operation in the push mode during river operations. The tug has accommodations for a crew of up to eight and is built to ABS A1 Towing Vessel standards.

The 76′ class tug design incorporates several environmentally friendly features including:
•Propulsion and auxiliary engines that meet all IMO emissions requirements.
•Forward fuel tanks surrounded by void spaces on the sides to minimize the change of fuel spills in the event of collision.
•Holding tanks to retain all treated sewage on board.
•Electric deck machinery to prevent hydraulic oil spills. 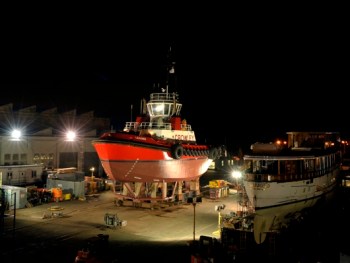