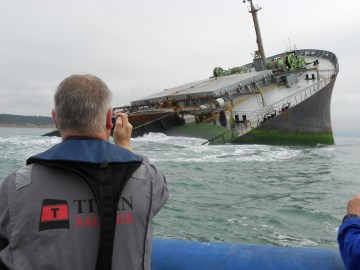 (HOUSTON; December 17, 2014) – TITAN Salvage, Crowley Maritime Corp.’s Houston-based marine salvage, emergency response and wreck removal company, has successfully refloated and scuttled the largest and most challenging section of the wrecked bulk carrier,Smart.The vessel was carrying a load of coal when it went aground in August 2013 in heavy seas in Richards Bay, South Africa. Complications ensued whenthe carrierbroke apart after only two days. 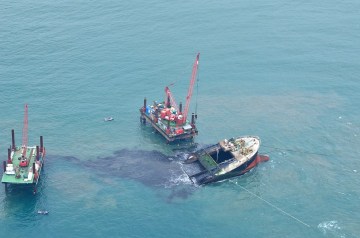 At the end of 2013, TITAN’s experts were called to the scene, including Salvage Master Guy Wood, to refloat and scuttle the most complex and challenging portion of the vessel, the bow, which was partially buried in mud. Soon after arriving on scene, the TITAN team deployed its proprietary jack-up barges Karlissa A and Karlissa B – which have a combined total of 1,880 meters of clear deck space and the ability to jack in depths of up to 50 meters – creating a stable, safe working environment. TITAN made preparations to remove pollutants, then lightered remaining cargo via hopper barge. To further reduce the weight of the wreck, Wood and his team made arrangements to have sand and mud removed from the bow using air-lift techniques. The TITAN team refloated, towed and scuttled the bow into designated waters, as approved by the South African Maritime Safety Authority, in only three days. 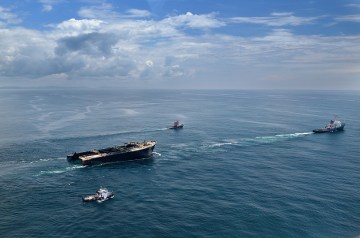 “It was a difficult job because there were so many unknowns,” said TITAN’s Gordon Amos, director operations. “From the very beginning, we had to accurately assess the weight of the bow to determine the lightering process and appropriate pulling forces. This was complicated by the fact that we didn’t know how much mud and cargo filled the forward compartments. Additionally, we were battling five-meter swells and challenging weather conditions. In the end, TITAN made all the right decisions. It was a job well done.” 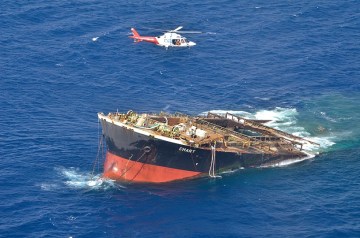 TITAN is now preparing for the removal of theSmart’sremaining mid-section. This final stage of work is expected to be completed in the beginning of next year.