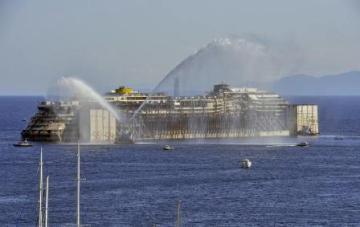 The Crowley Maritime Corp. subsidiary TITAN Salvage and partner Micoperi have confirmed that the Costa Concordia – the Concordia class cruise ship that wrecked along shores of Giglio Island, Italy, in January 2012 – has been refloated and has begun its final voyage to an assigned berth in Port of Genoa Voltri, Italy, some 200 miles away. The project is the largest and one of the most technically complex maritime salvage jobs ever completed.

Currently moving at an average speed of two knots, the slow and precise tow of the disabled cruise ship is being made by a convoy comprised of at least 10 other vessels. There are two tugs, with a combined 24,000 horsepower and 275 tons of bollard pull, at the ship’s bow towing the hull. Another two auxiliary tugs are positioned aft. The other vessels in the convoy, including a pontoon with a 200-tonne crane, are carrying personnel and equipment. A team of marine biologists are present during the tow and the convoy is being preceded by a specialized marine mammals-watching vessel. The convoy is anticipated to arrive in Genoa on Saturday, July 26, about mid-day pending favorable weather and vessel traffic in the area.

To ensure the continued integrity of this historic and unprecedented project, TITAN Salvage’s Nick Sloane, senior salvage master, and Rich Habib, salvage director, are onboard the Costa to provide around-the-clock, hands-on monitoring of the vessel’s list, ballasting, speed and more.

“This is the latest achievement in a very long series of detailed wreck removal phases,” explained TITAN’s Chris Peterson, vice president. “We have patiently and eagerly planned for this move and only upon confirming that is was safe to do so, got underway.”

Once the tow arrives in Genoa, it will be safely berthed thus successfully ending the historic salvage project. The T-M salvage team will assist with the transfer of the vessel to the Genoa consortium that will perform the dismantling.

To learn more about this extraordinary engineering project, please visit www.theparbucklingproject.com website, the official source of all project-related news.

Caption: Costa Concordia began its final trek at 1000 local time this morning and is anticipated to arrive in Genoa this weekend.