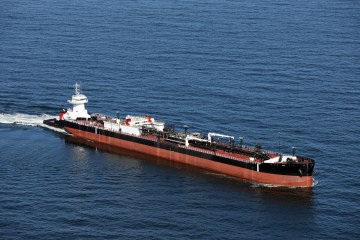 (Tampa, Fla.; October 03, 2013) – The crew aboard Crowley Maritime Corporation’s articulated tug-barge (ATB) Achievement/650-8 has performed its second rescue in nine months, this time saving the lives of four individuals aboard a 30-foot fishing boat taking on water 35 miles offshore from Clearwater, Fla., during a strong storm.

On the evening of September 15, the Achievement/650-8 was instructed to stand by and not proceed inbound to Tampa Bay due to a strong squall moving through the area, which brought torrential rains, 50-knot winds and heavy seas.  Due to the weather, the Tampa pilots also suspended boarding operations and the on-watch crew began to observe several marine advisories and distress calls come in over the radio in a very short period of time.

“While the U.S. Coast Guard (USCG) was very responsive in assisting the boaters in distress, one fisherman in particular was having difficulty communicating over his radio, as it got drenched in the storm,” explained Crowley’s Capt. Gus Cramer. “It was clear, however, that he was offshore in the stormy conditions.  At that time, the Coast Guard was stretched very thin because the squall caught everyone by surprise and there were many boaters in distress.  After a few minutes of monitoring their calls for assistance, it was clear that we were the closest vessel to their location, approximately 12 nautical miles south.”

Around 5:40 p.m., knowing the sun would go down in a few hours, Cramer made an urgent call to the USCG informing them that they were proceeding to assist the sinking offshore fishing boat. The USCG acknowledged and requested that the Achievement/650-8 keep them updated on the status of the rescue. Cramer then readied his crew and redirected the ATB towards the distressed vessel’s position at full speed. During the voyage out to sea, the Achievement/650-8 team stayed in constant communication with the fishing boat crew to receive regular updates of their changing position.

“What made the rescue more difficult was the fact that the captain of the fishing boat had to keep running with the winds and waves in order to prevent the vessel from continuing to take on water and sinking,” Cramer said. “Unfortunately, the winds and waves caused them to move farther and farther away from us and further offshore. After 45 minutes of traveling in their direction, we only gained four or five miles in their direction.”

Cramer radioed the driver of the boat requesting that he slow the fishing boat as much as was safe to do so, and the ATB slowly made up ground. After two hours at sea and shortly before nightfall, the Achievement/650-8 spotted the fishermen just as their radio died. Cramer messaged the USCG to alert them that the ATB was on scene and the crew readied the rescue equipment.

Once alongside the fishing boat, Cramer’s crew lowered the pilot ladder over the side, which is a tool traditionally used to allow harbor pilots to board.  After a few attempts to make a rescue attempt on the port side, Chief Mate Ryan Emmons readied the pilot ladder on the starboard side. Using only his flashlight and voice commands, he directed the vessel to come along the ATB. Once on the starboard side, a sea painter (rope) was passed to the vessel to keep them close and the  Achievement/650-8 made a lee (a slow, sweeping turn to starboard) allowing the fishermen, who fortunately were uninjured, a safer and easier climb up the ladder. All four individuals were safely evacuated from the distressed boat and came aboard the Crowley vessel. No injuries were reported.

Once everyone was safely onboard, Achievement/650-8 attempted to tow the stricken fishing boat back to Tampa. Unfortunately, the line had to be cut to due to continued high seas that complicated the tow.  The Crowley crew communicated the coordinates of the drifting fishing boat to the USCG so that it could be located later.

The  Achievement/650-8 and the rescued persons arrived back at the Tampa sea buoy at 12:30 the following morning, and proceeded inbound for a petroleum berth in downtown Tampa, arriving around 05:30 a.m. Despite being chilled and wet, all four individuals walked off of the Crowley vessel and had no need for medical attention. Following the incident, the Achievement/650-8 safely delivered a load of fuel.

“The Crowley crew did a phenomenal job working as a team to save the lives of these fishermen,” said Cramer. “We chose the safest-possible plan and it worked because everyone knew what to do well in advance and the crew worked as a team.”

The crew aboard the  Achievement/650-8, which is a member of Crowley’s petroleum services fleet, is fully trained and prepared to respond to a variety of incidents. In addition to meeting defined regulatory training requirements, the company’s crewmembers participate annually in company-sponsored safety programs, designed exclusively for mariners. The program provides training in survival tactics, shipboard fire fighting, medical incidents and other relevant topics to give the mariners the skills they need to survive in emergency situations.

“The great actions of this crew are due to their safety training, diligence and ability to work together,” said Crowley’s Rob Grune, senior vice president and general manger, petroleum and chemical transportation. “The entire Crowley family is exceptionally proud of the crew for their bravery and competency in yet another challenging situation this year. These crewmembers are true heroes and deserve to be recognized for their actions.” 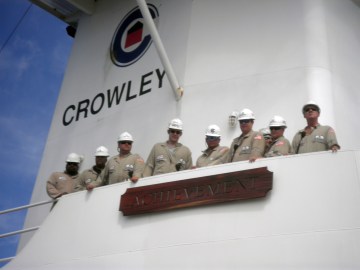 The first rescue of 2013 involved this same heroic crew, again led by Crowley’s Capt. Cramer, which rescued a badly injured man who was struggling to stay afloat near the base of the Sunshine Skyway Bridge in the Bay. During the rescue, the Crowley team quickly lowered the vessel’s rescue boat while underway and managed to pull the man from the water in less than eight minutes from the initial sighting and wrapped him in a blanket until the St. Petersburg Fire and Rescue boat arrived on scene to perform other life-saving treatments.

An ATB is a tank vessel (the barge) that can carry a variety of petroleum and chemical products. The tank vessel (the barge) is connected to a large, powerful tugboat that propels and maneuvers the vessel. Crowley owns and operates 17 U.S.-flagged ATBs, which include 155,000-barrel, 180,000-barrel and 330,000 barrel capacity tank vessels. Crowley also owns two U.S.-flagged tankers with 330,000 barrel capacity. Each vessel is chartered to leading companies in the petroleum and chemical industries. Additionally, Crowley operates a number of Jones Act tankers on behalf of other owners which trade both domestically and internationally.