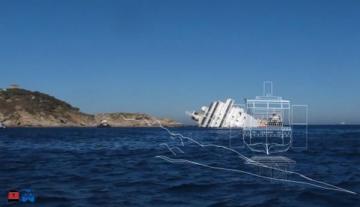 Click here to watch the recent “60 Minutes” documentary, which aired Sunday, Dec. 16, for an inside look at the salvage efforts surrounding the Costa Concordia. The cruise ship Costa Concordia partially sank earlier this year, in Jan. 2012, after hitting a reef off the Italian coast and running aground at Isola del Giglio.

Crowley Maritime Corp.‘s marine salvage and wreck removal subsidiary, TITAN Salvage, based in Pompano, Fla., is working closely with partner Micoperi, an Italian company specializing in underwater construction and engineering, to refloat the wrecked cruiseliner and tow it away to a port, where it will be scrapped. Read more about the salvage job’s progress online here.