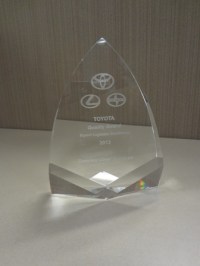 Jorge Estevez, vice president of sales and marketing, accepted the award on Crowley’s behalf during the annual TLS partners meeting, a gathering at which Toyota recognized its ocean, rail and motor providers for extraordinary service over the past year.

“Crowley continuously strives to be an essential partner for Toyota to help ensure their continued success,” said Estevez. “The award recognizes our ability to deliver their export vehicles in better condition than any other carrier, as well as our focus on continuous process improvement in order to accomplish this.”