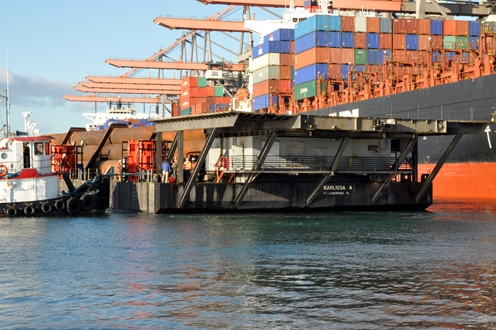 (Pompano Beach, Fla.; Jan. 22, 2010) – TITAN Salvage’s jack-up barges Karlissa-A and Karlissa-B arrived in Rotterdam, Netherlands, today for the wreck removal of the Vinca Gorthon, a roll-on/roll-off vessel, which sank in the North Sea in 1988.

The Vinca Gorthon lies approximately 29 kilometers off the Netherland coast at a depth of 24.5 meters in a very busy shipping traffic lane. The vessel protrudes 10 meters from the seabed and has become a danger to modern ships with a draft of 15 meters or more.

The Vinca Gorthon weighs approximately 19,000 tonnes with cargo, and measures 166 meters long and 23 meters wide. The ship, which was laden with rolls of paper and tank trailers with paper pulp, was en route from the Swedish port of Oskarshamn to Antwerp, Belgium, when she sank.

Prompt removal of the wreck is critical due to the increase in the number of ship movements in the North Sea related to developments in offshore energy, including oil and gas and wind parks. The wreck is blocking part of the navigational route.

In 2008, TITAN used both the Karlissa-A and Karlissa-B barges, which were raised 40 feet above the surf zone, to remove the New Carissa, a 640-foot (195 meter) wood-chip carrier, which ran aground just north of Coos Bay, Oregon, during a February 1999 storm. The barges served as a stable platform for the salvage team to work on and above a very active surf zone.

TITAN, a wholly owned Crowley subsidiary, is a worldwide marine salvage and wreck removal company based in Pompano Beach, Fla., that has performed over 350 salvage and wreck removal projects since 1980, including some of the most technically demanding projects ever undertaken. The company also has offices and equipment depots in Newhaven, UK and Singapore. Titan responds to vessel emergencies around the world and is able to mobilize a worldwide network of expert salvage professionals and specialized, portable equipment within hours of activation. TITAN is accessible 24 hours a day through the company’s main dispatch telephone number, +1-954-545-4143. Additional information about TITAN may be found at www.titansalvage.com.