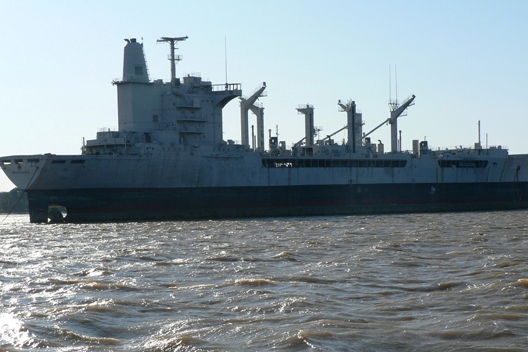 (Pompano Beach, Fla.; Jan. 7, 2010) – TITAN Salvage has been retained to handle salvage of the Monongahela, a decommissioned tanker ship that broke loose from its moorings on the night of November 12.

The tanker ship, which is part of the James River Reserve Fleet (JRRF), was affected by a severe storm and unusually high water surges in the James River and nearby vicinity when it was wind driven aground on soft soil, approximately one-half mile downstream of the JRRF near the western bank of the river.

TITAN has completed hydrographic surveys for use in the finite salvage calculations required for a salvage plan. The salvage team is now preparing to execute a test pull using one TITAN hydraulic puller to verify holding power of the anchors being used and help in determining refloating calculations relative to onsite conditions.

TITAN has completed the first phase of mobilization for the “test pull” with mobilization and installation of additional scheduled to be completed next week for a planned refloat of the vessel in mid-January. TITAN Salvage will work alongside the U.S. Maritime Administration (MARAD), U.S. Coast Guard and other state and local authorities, to ensure a safe recovery operation.

TITAN, a wholly owned Crowley subsidiary, is a worldwide marine salvage and wreck removal company based in Pompano Beach, Fla., that has performed over 350 salvage and wreck removal projects since 1980, including some of the most technically demanding projects ever undertaken. The company also has offices and equipment depots in Newhaven, UK and Singapore. Titan responds to vessel emergencies around the world and is able to mobilize a worldwide network of expert salvage professionals and specialized, portable equipment within hours of activation. TITAN is accessible 24 hours a day through the company’s main dispatch telephone number, +1-954-545-4143. Additional information about TITAN may be found at www.titansalvage.com.