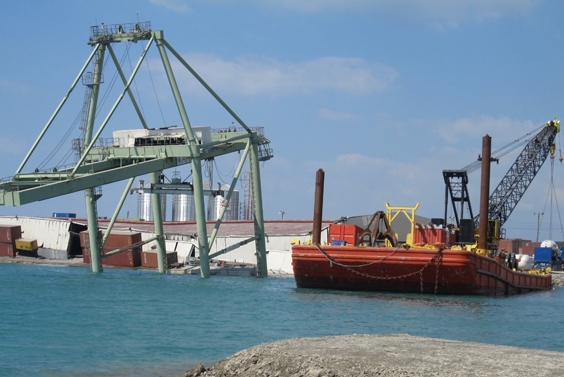 (Pompano Beach, Fla.; Feb. 12, 2010) – A TITAN Salvage team is working in Haiti to remove navigational hazards, including the collapsed Washington gantry crane, in Port-au-Prince for the U.S. Transportation Command (USTRANSCOM), in an effort to increase the cargo throughput in the heavily damaged port.

In January, the TITAN team conducted an extensive survey of the port to map navigable routes into the port and determine what underwater obstacles needed to be removed to allow cargo to enter the country directly via vessel. During that survey, TITAN determined that a cargo lightering operation was possible in Port-au-Prince whereby a Crowley containership could transfer full container loads to a smaller vessel offshore and deliver that cargo over a beach.

Since then, Crowley has delivered approximately 935 containers of relief cargo using this lightering method.

“We’re working closely with USTRANSCOM to re-establish port functionality,” said Dan Schwall, managing director of TITAN. “The faster the port becomes more usable, the faster relief and commercial cargo will make it into the hands of the people of Haiti.”