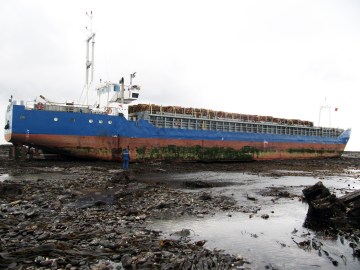 (JACKSONVILLE, Fla.; April 23, 2013) –TITAN Salvage has successfully refloated the 262-foot containership M/V Danio from its stricken position on England’s Northumberland coast despite challenging sea and weather conditions. Danio, which was carrying a load of timber and en route to Belgium from Scotland, ran aground at Farne Islands, an environmentally sensitive area, in early March. The onset of severe weather conditions prevented an immediate attempt to tow the Danio from the coastline.

Because the Farne Islands – home to thousands of puffins and grey seals, as well as more than 20 bird species – is classified as a site of Special Scientific Interest (SSI), TITAN took extra precautions to safeguard the environment. The company’s Jason Bennett, commercial director, and his team of salvors took quick action to establish safety of the vessel, immediately deploy a tugboat and prepare for a controlled and safe re-floating operation. Danio was ballasted down to the rocky sea bottom while the TITAN team repaired damage to the vessel’s skeg and other areas, which required cement boxing, shoring and patching before the vessel could be refloated and towed away. Portable pumps were also installed and used during re-float and transit to safety.

Salvage Master Mark Loughlin, of C Waves, a London-based independent maritime and engineering consultancy contracted by the TITAN alliance, transferred to Danio after initial assessment and remained on board alongside the crew throughout the operation. He was joined by TITAN’s salvage team, which worked in difficult conditions to ensure that the ship remained secure in the deteriorating weather conditions, which were marked by high seas and swells (up to seven meters), freezing rain and gale-force winds.

During a brief window of suitable tides, Danio was successfully refloated without incident with the assistance of the TITAN-chartered tugboat Lomax.

“TITAN worked quickly to ensure that there were sufficient people and equipment on site in a timely manner,” said the company’s Rich Habib, managing director. “In addition to prioritizing protection of the environment, the two-week salvage job was successful in large part because of TITAN’s excellent working relationships with the authorities and client.”

When it was determined that conditions were too extreme for supplies to be brought in via helicopter, Bennett and his team partnered with local fishermen who ferried in equipment and provisions. The TITAN team also worked closely with Briggs Marine Environmental, which provided spill-prevention equipment, the Secretary of State’s Representative for Maritime Salvage and Intervention (SOSREP), the Maritime and Coastguard Agency (MCA), the Environment Group (EG) and the National Trust, alongside the ship’s owner and insurers, to ensure vessel security and environmental protection.

Hugh Shaw, Secretary of State’s Representative for Maritime Salvage and Intervention, said of the successful job: “I am delighted that the salvors have successfully re-floated the ship without any damage to the environment. I would like to take this opportunity to offer my thanks to all concerned with the operation. In particular I would like to thank Titan Salvage for their professionalism in carrying out the operation in the extremely difficult weather conditions experienced since the grounding.”

No spills or damage to the region were reported as a result of the incident or salvage work.

TITAN, a wholly owned subsidiary of Crowley Maritime Corporation, is a worldwide marine salvage and wreck removal company based in Pompano Beach, Fla., that has performed more than 400 salvage and wreck removal projects since 1980, including some of the most technically demanding projects ever undertaken. The company also has offices and equipment depots in the UK, Singapore & Australia. TITAN responds to vessel emergencies around the world and is able to mobilize a worldwide network of expert salvage professionals and specialized, portable equipment within hours of activation. TITAN is accessible 24 hours a day through the company’s main dispatch telephone number, +1-954-545-4143. Additional information about TITAN may be found at www.titansalvage.com.