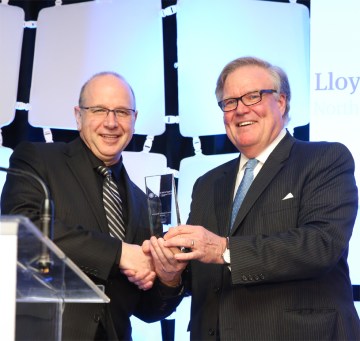 The Marine Casualty Response award recognized TITAN’s efforts in the Costa Concordia wreck removal project, which met the award criteria of representing an incident that threatened life, the environment and property. When selecting TITAN for the honor, the judges considered the team’s actions that directly attributed to protecting the marine environment during the project, including the team’s success in avoiding any additional damage to the wreck site during the parbuckling; the proactive steps taken to restore local flora and fauna; the partnership with the University of Rome to document the environmental, technical and engineering efforts, and more.

The cruise ship Costa Concordia partially sank in January 2012 after hitting a reef off the Italian coast and running aground at Isola del Giglio. Since then, TITAN has worked closely with partner Micoperi, an Italian company specializing in underwater construction and engineering, to refloat the wrecked cruiseliner and tow it away to a port, where it will be scrapped. The project is considered the largest wreck removal project in history.

“It was a true privilege to accept this award on behalf of the TITAN/Micoperi team and the hundreds of people who have worked tirelessly on this project,” said Peterson. “The recent successful parbuckling was special for so many reasons and to so many involved, including the residents of Giglio and Italy, our talented team, and the passengers who were impacted. And while we celebrate this, it is also important for those of us who represent an industry that responds to disaster to remember those who have lost their lives as a result of incidents such as this one, and that we honor and respect their families.”

Caption: TITAN Salvage’s Chris Peterson accepts the Lloyd’s List Maritime Casualty Response Award on behalf of the company. The honor was given to TITAN for its Costa Concordia wreck removal efforts.