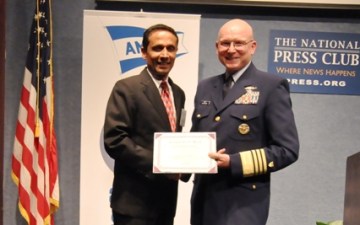 (WASHINGTON, June 15, 2011) ­- Sixteen Crowley-managed vessels were recently honored with U.S. Coast Guard (USCG) Automated Mutual-Assistance Vessel Rescue System (AMVER) awards in recognition of their voluntary rescue services to people aboard vessels in distress in 2010. Crowley received the recognition from Congressman Frank LoBiondo, chairman of the House Subcommittee on the USCG and Maritime Transportation, and Admiral Robert Papp, commandant of the USCG, during a dinner in Washington, D.C.

“Crowley is a proud participant and supporter of AMVER,” said Crowley’s Todd Busch. “As a company rooted in the maritime industry, we understand the importance of being there for fellow mariners in the event of an emergency. We were pleased to be able to offer assistance when needed and we appreciate the recognition.”

“National Maritime Day is a wonderful opportunity to recognize our merchant mariners and their tireless efforts to facilitate world trade while preserving safety at sea,” observed NAMEPA Founding Chairman and Dinner Chairman Clay Maitland.  “AMVER is a voluntary program where commercial implications are set aside to preserve safety of life at sea.  This is a maritime ‘good-news’ story which should make its way into the mainstream consciousness of our global society.”

The genesis of the USCG’s AMVER system – a computer-based voluntary global ship reporting system used worldwide by search and rescue authorities to arrange for assistance to persons in distress at sea – ultimately finds its roots in the Titanic disaster in 1912. Ships passing within sight of the ill-fated passenger liner were unaware that it had hit an iceberg and was sinking.  However, the resultant idea of a ship reporting system that could identify other ships in the area of a ship in distress, which could then be sent to its assistance, would not become a reality until the advent of computer technology. On April 15, 1958, the United States Coast Guard and commercial shipping representatives began discussions, which led to the creation of AMVER.