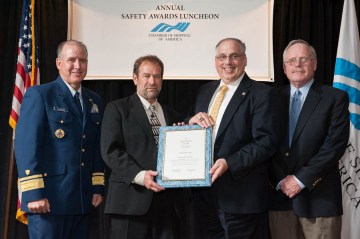 Ninety-six Crowley Maritime Corporation owned or managed vessels recently received the Chamber of Shipping of America (CSA)’s annual Jones F. Devlin Awards in recognition of their outstanding safety records in 2015. Each year the CSA grants Devlin Award certificates to manned merchant vessels that have operated for two or more years without incurring a Lost Time Injury (LTI), specifically highlighting the skills and dedication of the crewmembers responsible for safe vessel operations.

Crowley’s 2015 Devlin Award-worthy vessels together have achieved an impressive total of 639 years of service without an LTI. Of the 96 awarded, 23 have gone without incident for 10 or more consecutive years, including the following notable vessels: Valdez Star, 25 years, and Gus E, MV Chief, MV Guide and Roger G, each with 17 years; MV Aku, MV Veteren, MV Vigilant and Tug Nanuq, each with 16 years and Cape Edmont with 15 years. Crowley’s vessels have earned Devlin Awards annually since 2005.

“We have been holding these annual award ceremonies since 1958,” said Kathy Metcalf, CSA President. “This was the 58th anniversary of the program. For that initial year, we honored six vessels having a total of twelve years operation with no lost-time incidents. This year, awards were conferred on 1522 vessels that operated 10,084 years without a lost-time incident. This extraordinary record is directly attributable to the professionalism of our seafarers and the dedication of shore-based company personnel to safe operation.”

“Safety is at the top of Crowley’s core values and strategic goals. The vessels receiving Devlin Awards exemplify this Crowley core value, because they live it every day – for themselves, their families and Crowley,” said Crowley’s Mike Golonka, vice president, government services.

The following list shows all the vessels owned or managed by the Crowley family of companies that have been recognized by CSA with the 2015 Jones F. Devlin Award, along with the consecutive number of years each has operated without an LTI: