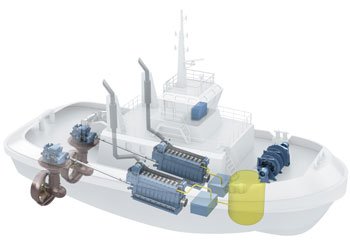 Within the past two years, liquefied natural gas (LNG) has gained a major foothold in the U.S. maritime industry. Large ferry companies in the Unites States and Canada are planning to adopt the fuel, and several U.S. operators have placed orders for offshore supply vessels and containerships.

One key exception to this trend has been the tugboat industry, where several gas-powered vessels are in the design pipeline but none are in use.

While there is little doubt LNG-powered tugs and towboats will have a role on North American shores, it’s far from certain when and in what way that might happen.

“I wouldn’t be surprised if you see a bigger move in the near future,” said Johan Sperling, vice president of Crowley’s Jensen Maritime unit. “Whether that is a year or a couple of years, we don’t know.”

The benefits of liquefied natural gas are obvious: It burns up to 30 percent more cleanly than diesel, giving operators and port authorities a real opportunity to reduce carbon and nitrogen emissions. It also costs less than diesel.

“Even though there are challenges, people are looking at it because of the economic benefits and because of the environment,” said John Waterhouse, chief design engineer for Elliott Bay Design Group, the marine architecture and design firm based in Seattle.

What are some of these challenges?

In the near term, the lack of bunkering services at most major ports is a major hurdle. The supply chain needed to get the fuel to the ports is also still in development.

“As of right now, there are not that many places where you can economically get LNG fuel to bunker your tugboats,” Sperling said.

He characterized LNG as a “chicken and egg” scenario. Operators are reluctant to order LNG-powered ships without reliable access to fuel, and fuel companies are reluctant to build the infrastructure without a ready market.

Longer term, there is plenty of uncertainty about the cost of LNG. Although the fuel costs about a third less than diesel, prices can shift quickly.  Because LNG-fueled tugs cost between 15 and 40 percent more to build, a sustained rise in prices could reduce its appeal.

“Even with substantially cheaper fuel, the payback period for the extra capital cost for equipment may not always make it worthwhile purely from a cost saving perspective,” said Vince den Hertog, vice president of marine engineering for Robert Allan Ltd.

There are also design challenges and performance concerns.

Waterhouse, at Elliott Bay Design Group, said LNG packs less energy than diesel on a pound for pound basis. For that reason, LNG-powered vessels require much larger, specially designed cryogenic tanks to keep the gas in a liquid state.

“You need to carry more pounds of it to get the equivalent energy output. The other challenge of LNG is the storage of LNG in cryogenic tanks means that it doesn’t use space as efficiently for storage as a diesel oil does.”

There are also performance concerns, especially at low rpms. “There is a concern when you are looking at a tugboat application as to where you need the power,” Waterhouse said. “What part of your torque curve is the vessel really going to be using?”

Other naval architects interviewed for this story acknowledged performance questions in some scenarios, but predicted engine manufacturers would resolve these issues over time.

The world’s first LNG-powered escort tugs are under construction in Turkey for the Norwegian energy company Statoil. The boats, which are powered by Rolls-Royce engines, are scheduled to enter service later this year in Norway, which offers subsidies for LNG.

In the United States, where there are no such subsidies, Foss Maritime was at the forefront of the “green” tugboat movement with its two hybrid electric-diesel tugboats in use in San Pedro, Calif. A Foss spokeswoman said the company has no plans currently for LNG-powered tugs.

Despite these challenges, interest in LNG tugs is rising, said den Hertog. Several companies interviewed for this article acknowledged having one or more LNG-powered tugs in the design stages.

Waterhouse believes escort tugs will be the first in the U.S. market to use LNG. These boats generally come and go from the same ports, solving the fuel issue. They would also require smaller tanks than inland pushboats or tugs used for near-shore barge shipping.

Sperling agreed, saying escort tugs are “probably the most economical solution for an operator at the moment.” He believes inland pushboats on the Mississippi River could be the next step.

“If you could figure out a way to have a fueling station in New Orleans or one up the river somewhere, you could quickly see that market move,” Sperling said. “There is some serious savings … if you can make that work. But there is a bunch of hoops they have to jump through if they are going to get there.”

Image: While there are hurdles to the adoption of LNG, the first LNG-powered escort tugs are under construction in Turkey for the Norwegian energy company Statoil. They will be powered by Rolls-Royce engines. Courtesy Rolls-Royce