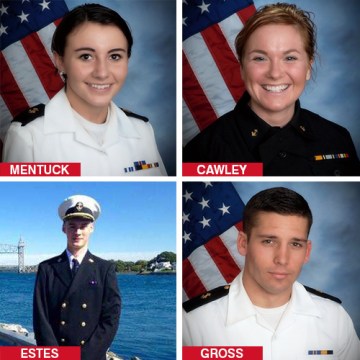 Mentuck, from Swampscott, Mass., is a third-class cadet majoring in marine transportation. She is the first female to have achieved the rank of cadet chief mate, one of the highest deck ranks at the Academy. She spent the 2017 winter term cadet shipping aboard the Crowley-managed containership Washington Express.

Cawley, from Fernandina Beach, Fla., is a third-class cadet in maritime transportation who sailed aboard the Crowley tanker Louisiana. She has been a member of the rowing team and has organized annual entries for the Spartan Race, while also serving as treasurer of the Academy’s Muscle & Athletics Sport Society (MASS) club, which encourages cadets to live active lives. Cawley is sailing again this summer as a deck cadet aboard the Crowley-managed tanker Evergreen State.

Third-class cadet Estes, originally from Carver, Mass., is majoring in marine transportation. He sailed aboard the Crowley-managed containership St. Louis Express during his 52-day junior sea term. He has been chosen among 45 cadets to sail again during his senior sea term and has been tapped to assist the ship’s third mate with maintaining the internal communication systems and computers.

Gross, a third-class cadet from Tampa, Fla., is majoring in marine engineering. His participation on the football team, including as captain, has earned him performance accolades including, second leading tackler during his sophomore year in 2015, all-conference honors as a junior in 2016, and the athletic director’s honor roll. As a senior at MMA, he hopes to complete his sea term as senior officer aboard the Academy’s 540-foot training vessel, the T.S. Kennedy.