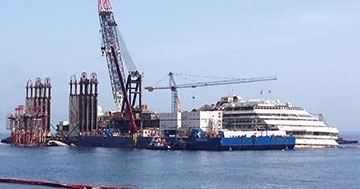 With Government approval of transportation of the Concordia to Genoa, technicians are ready for refloating the wreck in two weeks.

“The Cabinet’s approval of the project for transportation of the Concordia to Genoa for dismantling and recycling means that achievement of the goal we set ourselves 2½ years ago – namely the safe and definitive removal of the wreck from Giglio Island – is now well within sight,” said Costa Crociere CEO Michael Thamm.“We are now just two weeks away from refloating of the ship. We wiIl supervise the final phase of the Concordia project with the same commitment and attention that we have put into this challenge since the very beginning, using the best expertise and technologies, in compliance with the highest environmental safety standards, and in full cooperation with the authorities”.

With the green light for the towage of the Concordia wreck to Genoa, the 350-plus Crowley Maritime subsidiary Titan Salvage and Micoperi technicians working 24/7 at Giglio Island can now rapidly complete the preparatory operations for refloating.  Currently only two more sponsons are still to be installed to reach the total of 30 needed to refloat the wreck. Refloating is scheduled to start by the middle of July upon authorization of the Monitoring Observatory, and the definitive departure from Giglio Island is planned by the end of the month.

“The Concordia’s last voyage will be provided by Titan Micoperi, the consortium commissioned to carry out the salvage operation on Giglio Island” Thamm explained. “Once the ship is in Genoa, we will be able to count on the cutting-edge technical and management skills of the consortium formed by Saipem, dealing with the environmental aspects of the Concordia dismantling operations, and San Giorgio del Porto, the first shipyard in Italy to be included in the Special Register of Environmental Ship Reclamation & Recycling Facilities, which has many decades of experience in ship repairs and refitting. The technical and financial solidity of Saipem/SGdP represents an important guarantee for the project.”

The last phases of the Concordia wreck removal project – refloating, transportation and dismantling/recycling – will be explained in detail by Costa Crociere and its partners in the next few days. Information about the progress of operations and details of upcoming media briefings will be posted on the project website: www.theparbucklingproject.com.

Transportation from Giglio Island to Genoa

Once it is afloat, the wreck will be towed to the port of Genoa Voltri under the direction of the Titan Micoperi team, which is already in charge of the Concordia salvage operation. It will travel a distance of about 190 nautical miles at an average speed of 2 knots, taking an estimated 4 days. The time window for the transportation falls statistically in the period characterized by the best sea and weather conditions. Studies and analyses have confirmed the safety of the planned method of transportation. As has always been the case in all phases of the Concordia removal project, environmental protection is the top priority. The ship will be towed at low speed and escorted by other vessels, with equipment and specialized personnel, including a team of marine biology experts, ready to intervene should any problem arise.

Background on the dismantling/recycling project

Dismantling and recycling will be provided by a consortium formed by Saipem, part of state-owned ENI Group, leading company in Engineering and Environmental projects, and San Giorgio del Porto, a shipyard active since 1928 in ship repairs and refitting, the first shipyard in Italy to be included in the Special Register of Environmental Ship Reclamation & Recycling Facilities.

The Saipem/San Giorgio del Porto plan for dismantling and recycling of the Concordia wreck will be carried out in four separate phases, which are expected to last for a total of 22 months. In the first, the Port of Genova Voltri will be readied to receive the vessel and perform initial ship breaking activities including stripping of the interior furnishings and fittings on the decks above water. In the second phase the wreck will be transferred from the Voltri Breakwater to the “Molo Ex Superbacino” dock, where the structures of decks 14 to 2 will be dismantled. The third phase will consist of preparatory activities for transfer of the wreck to Dry Dock no. 4:  at this stage the sponsons will be removed and the food storerooms and cold storage rooms on deck 0 will be cleaned. In the fourth and final phase, operations will be carried out in the segregated area of Dry Dock no. 4 with complete disassembly of the wreck, involving removal of the other interior fittings, clean-up of the various areas and final demolition of all remaining structures. This phase will conclude with appropriate handling, disposal and recycling of the discarded materials.

The Concordia wreck removal is an extremely complex technical engineering feat – considered the biggest salvage ever attempted on a ship of its size – with the deployment of the finest international expertise, state-of-the-art technology and unprecedented financial resources.

The priorities of the project were clear from the outset: respect for the environment, workplace safety and protection of the Giglio’s island socio-economic fabric.

The Concordia wreck has been rotated in a vertical position with a successful parbuckling operation on September 17, 2013.