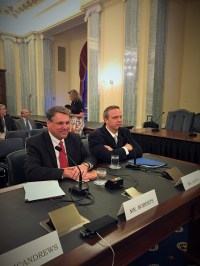 In a combination of written and oral testimony made last week before the Senate Committee on Commerce, Science and Transportation Subcommittee on Surface Transportation and Merchant Marine Infrastructure, Safety and Security, Roberts said, “In general, the carriers and other mainland businesses interested in Puerto Rico have supported a package that includes an appropriate mechanism to restructure bond debt, to create a control board with limited powers help the Puerto Rican government work through its financial challenges, and other measures. In Crowley’s case, we took this unusual step based on our 60 years of commitment to the island, recognition that the Puerto Rican economy is in rough shape, and our belief that Congress has a critical role to play in righting the ship.”

However, the recent debate on stabilizing the economy of the island of 3.5 million residents has also triggered discussions in some quarters of exempting the Puerto Rico trade from the Jones Act, which ensures the U.S. has a strong maritime industry for trade and national security.

“A few have taken this legislative activity as an opportunity to urge that a Jones Act exemption for Puerto Rico be included in the package,” Roberts testified. “They have offered no credible proof that such a change would help Puerto Rico, and we are confident it would do more harm than good both for Puerto Rico and for the country generally.”

Continued Roberts: “Such a change would put at risk the reliable, efficient service the Island currently receives, as well as hundreds of private sector jobs on the island, with no offsetting gains. It would also send a chilling message that would bring further investment in vessels built in U.S. shipyards to a standstill.”

The Jones Act requires vessels in domestic waterborne trade to be owned by U.S. citizens, built in the United States and crewed by U.S. mariners. These provisions keep American shipping companies, shipyards, mariners, maritime academies and thousands of people working. The Jones Act aids in controlling shipbuilding costs for the Navy, the Marine Corps and the Coast Guard by ensuring the health of the industrial base.

Crowley continues to be committed to the island’s future, with more than $500 million in new terminal, pier and vessel construction underway, including two new ConRo (combination container and Roll-On/Roll-Off) ships that will be powered by liquefied natural gas. Crowley has served the Puerto Rico market since 1954, and occupied the 75-acre Isla Grande Terminal the entire time, making it the longest continual occupant of any Jones Act carrier in the trade. Crowley employs more than 250 in Puerto Rico, and has more weekly sailings and more cargo carried annually than any other shipping line, making it the top ocean carrier between the commonwealth and the U.S. mainland.

“American carriers have triggered the construction in U.S. shipyards, and deployment in U.S. domestic service, of vessels that may prove to be prototypes of the world shipping fleet as it begins to transition to extremely low-emissions propulsion,” Roberts told lawmakers in testimony.

“These vessels bring significant environmental benefits to Puerto Rico, where air quality is a major concern,” he added. “They also establish a substantial demand platform that enables the full development of American natural gas for use in transportation and other businesses in the southeast and throughout the country. It is a game changer.”

As part of his testimony, Roberts also addressed Crowley’s efforts with the maritime industry and the U.S. armed forces to increase opportunities for veterans to obtain jobs in the maritime industry. The industry projects a strong need for qualified mariners during the next decade, and service members’ training, especially in the Navy, can make them ideal candidates. However, veterans experience difficulties receiving the necessary credentials through the Coast Guard for maritime licensing.

“I don’t think there’s any competing interests at stake here. I think it’s a function of finding a way of helping veterans find jobs, fill a need in the commercial side, and get mariners who are needed for our national security sealift purposes,” Roberts said. “It can be done.”

During oral remarks, Roberts also addressed the industry’s commitment to safety and environmental stewardship, particularly as use of tankers in the petroleum and chemical transportation has increased. Crowley’s tanker business recently surpass 1 billion barrels in in petroleum transfers over about 10 years. During that time, accumulated spills to water totaled about only 6.2 gallons.

“It is something that our customers in the oil business require. They expect it,” Roberts told senators. “They understand that it costs money to do that, and they are willing to fund that activity. It is a remarkable change I think if you look at where the industry was the industry was 10 or 15 years ago and the progress that has been made, it is a very good story.”

Roberts’ written testimony is available here and his oral statement to the Senate Commerce Committee can be viewed here.