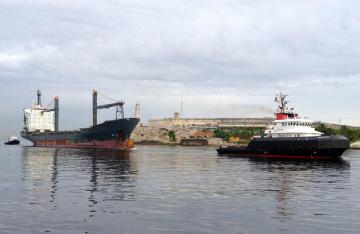 (HOUSTON, October 31, 2012) – The first of four Crowley Maritime Corporation ocean class tugboats, Ocean Wave, completed its inaugural project earlier this month by removing a grounded containership from the northern coast of Cuba. The job is additionally significant because it utilized many of Crowley’s unique capabilities, equipment and established relationships with Cuban entities and government to complete the job quickly despite many challenges.

The containership was en route from Santiago de Cuba to Havana, Cuba, when it came ashore after losing power during Tropical Storm Isaac in late August. Following the grounding, TITAN’s salvage master was on scene in less than 24 hours, Crowley’s government services team worked with U.S. and Cuban authorities to complete all necessary Customs documentation in advance, and the solutions team readied the Ocean Wave for the 48-hour transit from Orange, Texas, to the site of the project in Cuba.

The stricken vessel, towed by the Ocean Wave, was successfully removed from the coastline and delivered to port in Havana, Cuba, in early October.

“This successful project is a testament to the power of Crowley’s total capabilities,” said the company’s Todd Busch, senior vice president and general manager, technical services. “We leveraged many of our unique company assets – such as the Ocean Wave – our collective experience, and our long-standing relationships with the Cuban authorities and Antilliana De Salvemento to complete a challenging job quickly in a location where many others would be unable to work. Not only were we able to work as a team, but we performed the job quickly and without harm to the environment or any people. It was an excellent example of what Crowley can do in emergency response situations, in some of the most challenging locations in the world.”

About TITAN Salvage
TITAN, a wholly owned subsidiary of Crowley Maritime Corporation, is a worldwide marine salvage and wreck removal company based in Pompano Beach, Fla., that has performed more than 400 salvage and wreck removal projects since 1980, including some of the most technically demanding projects ever undertaken. The company also has offices and equipment depots in the UK, Singapore and Australia. TITAN responds to vessel emergencies around the world and is able to mobilize a worldwide network of expert salvage professionals and specialized, portable equipment within hours of activation. TITAN is accessible 24 hours a day through the company’s main dispatch telephone number, +1-954-545-4143. Additional information about TITAN may be found at www.titansalvage.com.