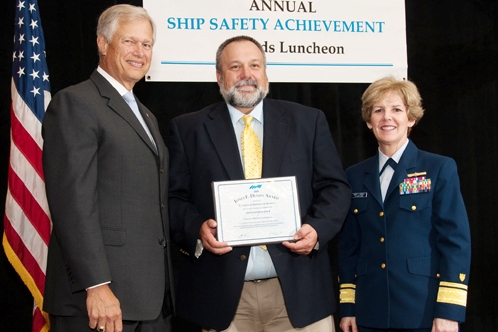 The CSA Devlin Award is presented each year to merchant vessels that have operated for at least two years without a LTI. Crowley vessels, like the SS Blue Ridge, which has not had a LTI in five years, consistently perform above and beyond industry safety standards.

“This year, we gave awards to 1,094 vessels that operated 7,108 years without a Lost Time Incident,” said CSA president, Joseph Cox. “This extraordinary record is directly attributable to the professionalism of our seafarers and the dedication of shore-based company personnel to safe operation.”

In addition to the Devlin award winners, Crowley tugs Cavalier and Sea Venture, along with their crews, were awarded CSA’s Ship Safety Achievement Letter of Commendation for their participation in emergency response efforts following the 7.0 earthquake that hit Haiti earlier this year.

In February, Cavalier and Sea Venture each brought one 400-foot by 100-foot flat-deck barge to Haiti for installation and continued use as makeshift dock while Haiti rebuilds its port infrastructure.

“At Crowley, our number one core value is safety,” said Capt. Victor Goldberg, Crowley vice president of marine operations. “It’s very gratifying for our crews to be honored for their safety accomplishments. The Devlin Awards are but one way to recognize that Crowley seagoing employees take a personal responsibility for the safety of themselves and their fellow shipmates.”

The Chamber of Shipping of America (CSA) represents 35 U.S. based companies that own, operate or charter oceangoing tankers, container ships, dry bulk vessels engaged in both the domestic and international trades and companies that maintain a commercial interest in the operation of such oceangoing vessels.