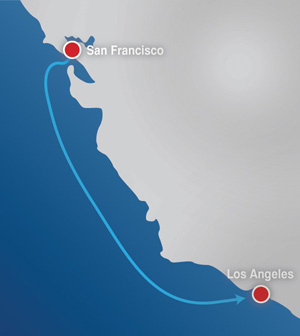 (SAN FRANCISCO, Calif., May 18, 2012) ­– Adding to a rich history of successful ocean towing projects spanning over nearly a half a century, Crowley Maritime Corporation is set to embark on a four-day tow of the retired military vessel USS Iowa from San Francisco to Los Angeles on Sunday, May 20.

Crowley’s 7,200-HP tugboat Warrior will connect to the former U.S. Navy battleship in a series of towlines and chains, and guide it from its departing point of Port Richmond, across the San Francisco Bay and under the Golden Gate Bridge, to its final destination in the Port of Los Angeles.  During the journey, the vessel will be flanked by a parade of ships in honor of the USS Iowa, including the SS Jeremiah O’Brien and President Franklin Roosevelt’s presidential yacht, among a host of other private vessels.

The USS Iowa, which is now owned and operated by the non-profit Pacific Battleship Center, is more than 14 stories high, 887 feet long and weighs more than 45,000 tons. It was fully operational through the 80s, World War II and the Korean War, and will be converted into an interactive museum that will highlight the vessel and its crew’s contribution during those critical moments in American history, once it reaches its permanent home at Berth 87.

“Crowley has had the opportunity to provide towing services for many of America’s most historically significant ships,” said Andrew Gauthier, port captain, Crowley marine services. “It is an honor for our team and company to have the privilege of caring for the USS Iowa on her journey to her new home.”

In the past, Crowley has successfully towed several other historic military ships and aircraft carriers, including the USS Missouri from Washington to Pearl Harbor in 1998, the USS New Jersey from Washington to Philadelphia via the Panama Canal in 1999, and the USS Oriskany from South America to Vallejo, Calif.

For decades, Crowley’s ocean towing and barge transportation team has positioned itself as a leader and expert in moving the large and unusual. The team guarantees unmatched expertise and specialized equipment to provide safe and reliable marine transportation and logistics solutions for project cargo offshore construction and module component movements worldwide.

The Pacific Battleship Center is a 501(c)(3) nonprofit organization established in 2009.  The organization was awarded custody of USS Iowa BB-61 on September 6, 2011, for display as a museum and educational attraction at Port of Los Angeles Berth 87. For more information about the non-profit and the USS Iowa, visit www.pacificbattleship.com

Jacksonville-based Crowley Holdings Inc., a holding company of Crowley Maritime Corporation founded in San Francisco in 1892, is a privately held family and employee-owned company primarily engaged in project solutions, transportation and logistics services in domestic and international markets.  Additional information about Crowley, its subsidiaries and business units may be found on the Internet at www.crowley.com.