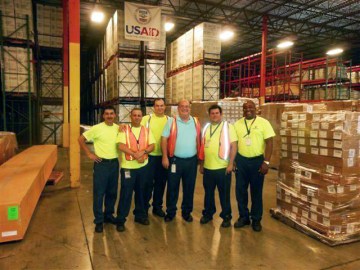 As one of the warehouse and logistics facilities contracted by the United States Agency for International Development (USAID) to provide pre- and post-disaster relief commodity storage services for the United States, Crowley Maritime Corporation’s Miami-based logistics team rapidly deployed emergency aid commodities for the Philippines last month in the aftermath of Super Typhoon Haiyan.

Less than four hours after notification on Nov. 11, Crowley’s logistics team loaded 86 pallets of inventoried food items onto six trucks for delivery to the Miami International Airport, where they were transferred to an emergency flight destined for the devastated region. On late Friday that same week, Crowley received an additional request for 411 pallets of hygiene kits and five-gallon water jugs to be urgently delivered to the airport. As the trucks were preparing to depart, however, the Crowley team was notified that no flights departing for the Philippines were available. Working quickly, Crowley utilized its inland trucking group to instead transfer the seven truckloads over the road for delivery to New York’s John F. Kennedy International Airport by Monday morning, meeting USAID’s expectations.

The Crowley logistics team remains on standby for additional shipments that may be required, including requests for other needed supplies, such as tarps and blankets.

“We are very proud of the Miami team’s ability to respond quickly and deploy creative solutions during a time of great need,” said Crowley’s Ken Black, director, logistics. “Delivering tens of thousands of relief supplies by air is never an easy task, but Crowley was able to tap into its company-wide resources and deliver the materials to the airports on schedule and without major delays.”

Crowley’s Miami warehouse is a distribution center for USAID relief supplies held for disbursement. Supplies are frequently called for, on an emergency basis, following natural disasters or in response to foreign governmental requests for assistance from the people of the United States. Once a shipment request is made, Crowley has only hours to pull and load the relief supplies for transit. To date, the company reports a 100 percent success rate in handling such requests.

“This type of effort is an area in which Crowley excels,” said Crowley’s Frank Larkin, senior vice president and general manager, logistics. “Our company is one of the few that can manage the entire logistical chain, including integrating the services of our liner group when necessary. As the sole manager of the USAID’s Miami warehouse and logistics facility, we’ve orchestrated humanitarian efforts throughout the world, helping USAID respond to all types of natural disasters – from floods in Pakistan to the devastating 2010 earthquake in Haiti.”

Crowley currently maintains both inventory and reporting processes allowing USAID representatives access to real time supply lists. From these lists, USAID can make shipment decisions following situational assessments from personnel stationed within the disaster area. Once agency approval from Washington D.C., is obtained, Crowley receives the request and delivers the supplies for transportation.

Haiyan, which made landfall in early November with the strength equivalent to a strong Category 5 hurricane, has been billed as one of the most powerful storms to ever make landfall in recorded history. Devastating portions of Southeast Asia, more than seven million people were directly affected, with more than 5,700 lives lost.