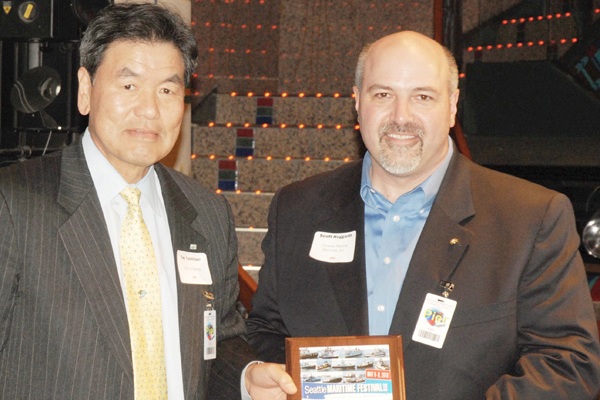 (Jacksonville, Fla.; May 21, 2010)—Crowley Maritime Corporation was recently recognized for its environmental stewardship by the Port of the Seattle and Seattle Propeller Club, which teamed to present the company with its runner-up award for Marine Environmental Business of the Year. The awards ceremony took place at the 59th Annual Maritime Festival Luncheon aboard the cruise ship Carnival Spirit in Seattle. The event, attended by more than 500 people from regional maritime industry, marked the culmination of Seattle’s annual Maritime Festival.

Of the nine companies to be nominated for the Marine Environmental Business of the Year award, Holland America took home the top prize and Crowley finished as the runner-up. Scott Hoggarth, Crowley general manager, ship assist and escort services, accepted the award on behalf of the company from Port of Seattle CEO Tay Yoshitani.

“We are honored to receive this recognition for our past and ongoing environmental stewardship efforts. From our many vessel emission reduction projects to our recycling and green initiatives shore side, the effort to improve the environment is truly a Crowley company-wide endeavor,” said Hoggarth.

Crowley’s long history of environmental protection and stewardship includes the publication of a Crowley Safety in Towing Handbook in 1970, approximately 20 years before the Oil Pollution Act of 1990, which contains operational procedures to prevent spills that many years later became law.