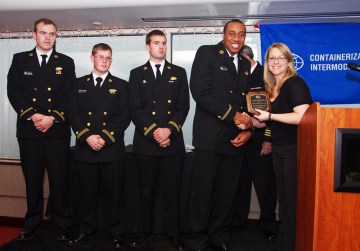 Beck, no stranger to Crowley, recently spent a sailing period aboard the Crowley-owned Ro/Ro vessel M/V Patriot, which was transporting cargo from the East Coast of the United States to several countries in Northern Europe including Germany, Belgium and England. He’s also sailed aboard a towing, brown water tugboat, which inspired him to pursue a career in the towing industry once he complete his marine engineering and shipyard management studies.

Stoeckler also experienced working aboard a Crowley vessel during his second sailing period while attending USMMA, which he spent aboard the Crowley-operated American Ro/Ro carrier (ARC) M/V Integrity, completing a 35-day run between the Eastern Seaboard, Belgium, Germany, and the United Kingdom. Along with pursuing an engineering degree, Stoeckler is currently working toward a 100 Ton Masters License. He plans to pursue a career involving small vessel operations.

Courtney is enhancing his studies serving two years as a skipper aboard the training tug M/V Growler, which regularly participates in towing and small vessel handling evolutions. He has also worked on ship assist tractor tugboats in Philadelphia, and is working toward improving maritime safety as a member of the U.S. Power Squadron.  After graduation, Courtney hopes to begin a career in the deep ocean towing, salvage, oil support or offshore construction industries.

Pluhowski is an aspiring tugboat crewmember who, during his time at the USMMA, spent sailing periods in the Middle East and Northern Europe. He has also worked aboard a dredge in dry-dock and tugs in the New York Harbor. He’s deeply interesting in working in the brown water tug industry once he completes his senior year at the academy.

Crowley has awarded more than 275 students from USMMA, other maritime academies and, select institutions throughout the country with scholarships since 1984. The company has also donated more than $2 million over the years to support other educational programs.

In 1994, Crowley Chairman, President and CEO, Tom Crowley Jr., established the Thomas B. Crowley Sr. Memorial Scholarship Program, in honor of his father, who guided the company to extraordinary heights before passing away in 1994. The company continues to give scholarship dollars to deserving students in the U.S., Alaska and Puerto Rico. In 2006, the program expanded to Central America and to date has provided financial assistance to 25 students in that region. To learn more about the Thomas B. Crowley Sr. Memorial Scholarship program or how to apply, click here.