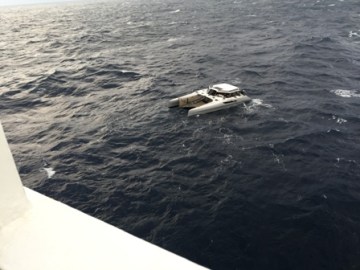 The crew of the Crowley-managed, 393-foot, heavy lift vessel Ocean Crescent recently provided assistance to five people aboard the damaged and drifting catamaran Rainmaker during a routine transit from Progresso, Mexico, to Halifax, Canada. Following a message from the U.S. Coast Guard (USCG) to render assistance, if possible, the Crowley crew onboard diverted the Ocean Crescent approximately 20 nautical miles to the west where they found Rainmaker stranded with two inoperable engines and a broken mast, which had penetrated the forward port window and destroyed the vessel’s navigational equipment.

First on scene, Ocean Crescent approached Rainmaker, pulled alongside and shielded the 55-foot sailboat from seas reaching six meters. The crew also relayed communications from the inbound USCG helicopter and search plane to the sailboat’s uninjured occupants, both of which arrived on scene about an hour after the Ocean Crescent. Once each of the sailboat’s occupants was loaded onto the helicopter, USCG dismissed Ocean Crescent from the scene, thanking the Crowley mariners for their assistance.

“Crowley crewmembers continue to be respected leaders in the maritime industry not just because of how they professionally conduct themselves during routine operations, but also for the ways in which they safely and compassionately conduct themselves in nearly any situation,” said Mike Golonka, vice president, ship management. “We continue to be among the most sought-after international vessel management companies in the world and it is undoubtedly in large part due to our outstanding crewmembers.” 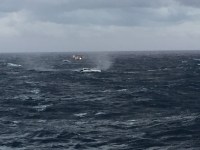 Crowley, founded 1892 and headquartered in Jacksonville, Fla., is one of the oldest ship owning and managing companies in the U.S., providing marine solutions, energy and logistics services in the domestic and international markets. As a third party ship management company Crowley provides technical services and crew management as well as a broad range of back office services. With offices in the U.S., Mumbai, Goa, Hong Kong and Amsterdam, Crowley’s international ship management group including Crowley Accord manages over 70 vessels of every type and variety. The company shows a strong focus on value added management models and safe, operational efficiency. To learn more about Crowley, visit www.crowley.com/shipmanagement, and to learn more about Crowley Accord and the various technical management services it provides visit www.crowleyaccord.com.

To download high-resolution copies of the photos for reproduction, click here and here.
The photos will open in your browser; right-click on the photos and select “Save As” to download.

Photo caption: The Crowley-managed Ocean Crescent was diverted from its route to aid a sailboat that had become stranded with two inoperable engines, a broken mast, and destroyed navigational equipment.