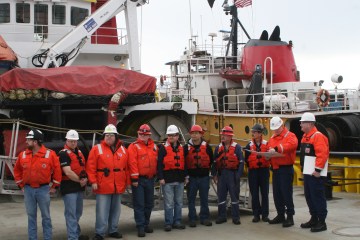 Captain Rodney Layton and his crew aboard Crowley’s Prevention and Response tugboat (PRT) Alert were recently recognized by U.S. Coast Guard (USCG) Capt. Paul Mehler III, sector commander captain of the port, for their “Professionalism, courage, and flawless performance in extreme conditions” during the emergency rescue tow of the drill barge Kulluk off the southern point of Kodiak Island.

Thomas Hancock, Crowley’s assistant port captain in Valdez, also attended, commenting, “It was an honor to attend this event and to see the pride and dedication that our mariners have achieved. Alert is a world-class vessel that can only operate to the ability of its crew. The crew is the key ingredient for a successful outcome and the crew is only as good as their leader. Capt. Layton is a true leader.”

In addition to the Alert commendation, USCG also recognized the crew of Crowley’s Invader class tugboat, Guardsman, for its assistance in providing logistical support during the incident.

Typically used for tanker escorts to and from the Alyeska Valdez Marine Terminal, the 10,192- horsepower Alert departed Valdez in response to the Unified Command’s request for assistance and arrived on scene to find Kulluk adrift at 4.5 knots in rough weather and sea conditions. The crew of Alert was able to catch a trailing line from Kulluk, despite having their deck awash by 30-foot seas, and proceeded to tie off and commence tow. The crew slowed and re-oriented the Kulluk’s drift so that the original towing tugboat could secure a connection to the drilling rig. However, with increasing heavy weather the original towing tug connection parted after approximately 10 hours.

Once attached, Alert remained tethered by emergency tow line to the Kulluk and continuously maintained tow. With 54-foot seas and 40 to 50 knot winds, the Alert was being pushed backwards up to two knots toward the Kodiak Island shore. A day later, the Unified Command directed the Alert to release the tow wire. Only after confirmation of the order, did the crew of the Alert reluctantly release the tow wire.

Crowley’s Valdez operation includes personnel and specialized tugs to help protect the environment through a contract with Alyeska Pipeline Service Company’s Ship Escort/Response Vessel System (SERVS). As part of the commercial partnership, the company provides tug escorts for tankers traveling through Prince William Sound to and from the Valdez Marine Terminal, assuring safe passage, even under the most extreme winter weather conditions and also provides secure docking and undocking operations at the oil product loading terminals. Primary tugs in the area include both Alert and Prince William Sound class vessels, all of which were specifically designed for tanker escort and assist work in the region and feature best-in-class technology, firefighting, emergency and oil spill response capabilities. Annual emergency tow exercises of loaded tankers conducted by SERVS well prepared the Alert crew for the Kulluk rescue tow.