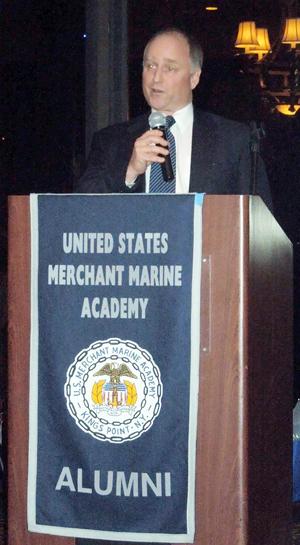 (JACKSONVILLE, Fla.; March 4, 2013) ­– Crowley Maritime Corp. President, Chairman and CEO Tom Crowley became an honorary alumnus of the United States Merchant Marine Academy (USMMA) during a special banquet recently held in his honor. The USMMA Alumni Association and Foundation, along with its affiliated Jacksonville Chapter, recognized Crowley for his years of unstinting support of the academy and its cadets in front of more than 130 guests, including past and present Crowley employees and USMMA graduates, at the University Club in Jacksonville, Fla.

Several USMMA Alumni Association and Foundation members, including President James Tobin and Chairman of the Board of Directors Charlie Hill, thanked Crowley and his company, and presented him with a special portrait of a racing sailboat on Long Island Sound painted by fellow alumni.

“This is an immense honor for me, not just because this is one of the most important and outstanding institutions of higher learning, but because one of our company’s core values is Our People, and many of our people have their roots with this academy,” said Crowley. “It’s because of them, and those who will come after, that I will always support the U.S. Merchant Marine and its mission to develop maritime leaders.”

Crowley has supported the USMMA through the establishment of the USMMA Scholarship Program funded by the Thomas B. Crowley Sr. Memorial Scholarship, which since 1994 has provided $10,000 in scholarships funds annually to deserving USMMA cadets.

In addition to providing scholarships, Crowley, who is a staunch advocate for the U.S. Merchant Marine and the Jones Act, has supported men and women at the USMMA with internships and jobs after graduation.

Crowley, who assumed responsibility for his family’s business after his father’s passing in 1994, has received several distinguished awards during his career, including the United Seamen’s Service Admiral of the Ocean Sea (AOTOS) Award. During his tenure as CEO, Crowley has been aggressive in his efforts to preserve the Jones Act.  This includes his spearheading of an industry-leading, new-build program which includes the company’s Articulated Tug Barge fleet –  currently serving the U.S. West, East and Gulf Coasts – and reentrance to the tanker market with the purchase of two Jones Act tankers, the Florida andPennsylvania, all of which have generated dozens of American jobs at sea and on land. He is a graduate of the University of Washington, and was honored by the USMMA in 2003 with an honorary doctorate degree during commencement exercises at the Kingspoint, N.Y. campus.

The USMMA was dedicated in 1943 by President Franklin D. Roosevelt to train U.S. citizens for service as officers in the U.S. merchant fleet. In 1974 the academy admitted women to the program. Operated by the Maritime Administration of the U.S. Department of Transportation, the academy has produced more than 20,000 graduates who serve the nation in the maritime industry, both at sea and ashore, and in the Armed Forces.