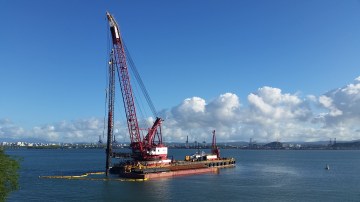 (San Juan, Puerto Rico; Nov. 17, 2015) ­– Crowley Puerto Rico Services, Inc. announced today that it has broken ground on a $48.5-million construction project for a new pier at its Isla Grande Terminal in San Juan, Puerto Rico. The project includes the development of a new 900-foot-long, 114-foot-wide concrete pier and all associated dredging needed to accommodate Crowley’s two new liquefied natural gas (LNG)-powered, Commitment Class ships, which are scheduled for delivery in 2017. Crowley’s terminal expansion also includes the installation of three new ship-to-shore container gantry cranes, which will be supplied under a separate contract.

“This important project represents close collaboration between private business and the Puerto Rico Ports Authority (PRPA) to make a major investment in the infrastructure of Puerto Rico,” explained Jose “Pache” Ayala, Crowley vice president, Puerto Rico. “We are very pleased to be working with a Puerto Rico-based construction company that is utilizing workers on the island and keeping the money in the local economy.”

The construction contract is being executed by L.P.C. & D. Inc., of Las Piedras, Puerto Rico, which began driving the first piles for the pier last week.

About 75 jobs have been created during the construction phase and about 100 new jobs will be created when the construction is completed in mid-2017 and Crowley begins service with its new ships.

“With the first pile driven, we look forward to watching the coming transformation of our terminal into the most modern and efficient port facility on the island,” said Tom Crowley, company chairman and CEO. “Our new terminal infrastructure will help us reposition Puerto Rico as a shipping and logistics hub for the Caribbean Basin and beyond, and open up many new opportunities for our customers.”

“This investment, which is resulting in jobs, economic impact, a cleaner environment and significant service enhancements for Puerto Rico shippers, would not be possible without the Jones Act,” said Crowley.

“While the act ensures that we have a robust shipbuilding capability and skilled merchant mariners in the U.S. essential to our national defense, it has also created a commercial shipping market between the mainland and Puerto Rico that is highly competitive, customized and dedicated,” said Crowley. “It is because of this competition and the longstanding rules of engagement spelled out in the Jones Act that we have the confidence to make this major investment for the benefit of the people of Puerto Rico.”

The pier design, using the latest displacement-based performance criteria, has been carefully developed over the past year with the PRPA and Harbor Consulting Engineers, Inc., of Seattle, Wash. As the lead design firm for the project, Harbor is the engineer of record for the project and the duration of the construction. Crowley and Harbor have worked together on infrastructure projects for nearly 40 years. Crowley recently completed the acquisition of the necessary permits, including those from the U.S. Army Corps of Engineers and other local agencies.