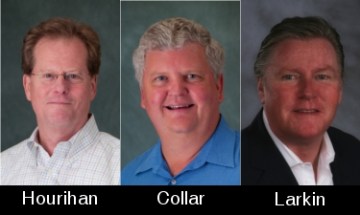 Frank Larkin has been promoted to senior vice president and general manager of logistics, and will now, in addition to managing the entire logistics enterprise, oversee U.S. sales, marketing, customer care and pricing for both logistics and liner services.

“The consolidation of U.S. commercial activities under single leadership is consistent with our desire to improve the customer experience, simplifying transactions and communications,” said Tom Crowley, company chairman, president and CEO. “The consolidation also reinforces our belief that customers will gain additional visibility into our full suite of services and benefit from dealing with a single, coordinated customer interface.”

Steve Collar, who is currently managing logistics, has been appointed senior vice president and general manager of Latin America services. In his new role Collar will be responsible for stateside and foreign operations as well as foreign commercial activities associated with Crowley’s liner cargo transportation between the U.S. and Central America.

John Hourihan, who is currently managing Latin America services, has been appointed senior vice president and general manager of Puerto Rico and Caribbean services. He replaces John Douglass, who will be retiring Dec. 31 after 25 years of service to Crowley. In his new role, Hourihan will be responsible for stateside and foreign operations as well as foreign commercial activities associated with Crowley’s liner cargo transportation between the U.S., Puerto Rico, the Bahamas, Eastern Caribbean and Western Caribbean, including Haiti, the Dominican Republic and Cuba.

The new appointments are effective Jan. 1. And all three executives will remain based in Jacksonville and report to Crowley.

“I want to congratulate and thank John Douglass for 25 years of distinguished service to the company,” said Crowley. “He has been instrumental in our success across a number of Crowley business lines over the years, and we wish him nothing but the best in retirement.”

“John leaves big shoes to fill, but I am looking forward to working with our realigned leadership team to see how we can leverage their skills, experience and new perspectives to continue to grow Crowley and make it an even better company,” said Crowley. “Combining all of our U.S. liner and logistics commercial activities in a single enterprise under Frank’s leadership is an excellent start.”

Larkin, who most recently served as vice president of sales, marketing and customer care for Crowley’s liner and logistics groups, rejoined the company last year after serving a 12-year stint with Hamburg Süd as senior vice president and member of the region North America board. Larkin had worked at Crowley from 1988 to 1999, serving in positions of increasing responsibility, including vice president and general manager of Crowley’s South America services. In his prior role with Hamburg Süd, Larkin was responsible for all commercial activities in North America and trade responsibilities in the U.S. to Latin America theaters. He has 30 years of experience in international transportation, including overseas postings in Brazil and Argentina.  He is on the board of directors of both the National Freight Transportation Association, a nationwide organization comprised of importers/exporters, railroads, ocean carriers and ground transportation services, as well as the Brazilian American Chamber of Commerce, where he serves as chairman of the trade and investment committee.  Larkin received his Bachelor‘s in Economics, cum laude, from Boston College and is fluent in Spanish and Portuguese.

Collar joined Crowley in 1977 as a deckhand, but throughout his career has been exposed to many facets of the Crowley organization, working in positions of increasing responsibility within engineering, terminal management, cargo operations, marine operations and petroleum operations. In 1996, he was named director of technical services before transferring to general manager of oil transportation. Prior to assuming his current position as senior vice president and general manager of logistics, he served as senior vice president and general manager of technical services. Collar attended school at Shoreline Community College in Seattle, and Point Loma College in San Diego. He earned a Masters in Business Administration from the University of Washington in 1999.