“This new agreement continues Crowley’s commitment to the trade and our long-term desire to grow and reinvest in the services we provide to our customers in Puerto Rico and the U.S.,” said John Douglass, senior vice president and general manager, Puerto Rico and Caribbean services. “We have successfully worked with the Teamsters Union to provide uninterrupted cargo transportation services with no strikes or work stoppages for over 40 years, and we look forward to continuing our mutually beneficial relationship for many years to come.”

Crowley has operated in Puerto Rico since 1954, and during that time has developed a strong and lasting relationship with the Puerto Rico community and its union team members. The company employs more than 260 people on the island, including members of Teamsters Local 901, who perform terminal operations and stevedoring services at Crowley’s Isla Grande terminal in San Juan.

“This new five-year agreement will provide continued stability for our operations and workforce in San Juan,” said Jose “Pache” Ayala, Crowley’s vice president in Puerto Rico. “Providing a quality, reliable service starts with having quality people working safely and efficiently to handle our customers’ cargoes. And that’s what we have with our union team members.” 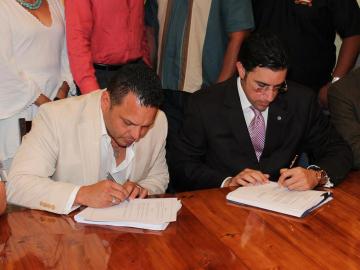