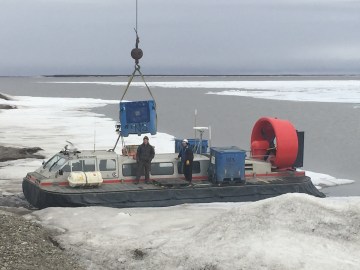 (PRUDHOE BAY, Alaska; June 11, 2015) ­– Most people know Alaska as the last frontier – a vast place where nature can be wild, unpredictable and uncooperative. Case in point: the Prudhoe Bay oilfields, where about half a million barrels of oil is extracted each day. One of the drilling sites is Endicott, located on a spit of land connected by the gravel Prudhoe Bay road system and normally accessible by truck. That is until recently, when the road was washed out. Faced with the dilemma of how to get workers, food and supplies to the work site, Hilcorp, one of the largest, privately-held exploration and production companies in the United States, turned to Crowley.

“With the road cut-off and heavy fog preventing helicopters from flying in and out, Hilcorp diverted the hovercraft  Arctic Hawk from its normal duties of supporting NorthStar Island, to shuttle people, groceries and other supplies to Endicott,” said Bruce Harland, Crowley vice president. “Hilcorp was already chartering the Arctic Hawk to provide a similar shuttle service to and from their Northstar Island drill site, so this was a natural extension of that service, which we were happy to provide.”

The Arctic Hawk, Crowley Offshore Services’ hovercraft, entered service in Prudhoe Bay in 2004 transferring BP work crews (now Hilcorp work crews) between land and the Northstar Island production facility about six miles offshore in the Beaufort Sea. A hovercraft is the most practical mode of transport for this service as the route must be traveled over open water in summer and ice during the winter and a mixture of ice and water during freeze-up and break-up. The Arctic Hawk is 38.8 feet in length with a 15.5 foot beam. It is considered a passenger vessel by the Coast Guard and carries a Certificate of Documentation (admeasured at 17 gross and 14 net tons) and Certificate of Inspection issued by Coast Guard Sector Anchorage.

Crowley in Alaska
Crowley, which has been serving Alaska for more than 60 years, currently operates 22 fuel terminals in western Alaska and the rail belt, with over 265 employees. The company continues to position itself as a leader in the Alaska fuel industry, providing transportation, distribution and sales of petroleum products to more than 280 communities across Alaska. Crowley also supports the energy industry on the North Slope with summer sealifts of large production modules and various marine transportation services. At the southern terminus of the trans-Alaska oil pipeline, Crowley provides tanker escort and docking services in Valdez Harbor and Prince William Sound for Alyeska Pipeline Service Company’s Ship Escort/Response Vessel System, utilizing some of the most technologically advanced and powerful tugboats in the world.  For more information, please visit:www.crowleyalaska.com.