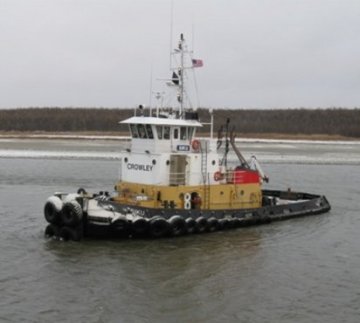 (Anchorage, AK; October 21, 2013) ­– The crew of the Crowley Maritime Corp. tug Siku, operating in Western Alaska, recently rescued six men adrift in the Bering Sea. Shortly before the incident, the men’s 21-foot, aluminum skiff ran out of gas in Hooper Bay and was being quickly blown out of the bay and into building seas.

Responding to a request by the Coast Guard, the crew of Siku, which was in the area holding for weather, located the skiff, which was drifting about a mile offshore of Hooper Bay despite having its anchor out. Siku Captain Angus Isaac instructed the skiff crew to pull up their anchor and ready themselves for a line from the tug. The captain then maneuvered the tug so that the skiff was in the lee to protect it and its passengers from the building wind and seas. The crew then threw a heaving line to the skiff and pulled it alongside the tug allowing the passengers to disembark and board Siku. The tug crew then attached a line to the skiff and towed the stricken boat back into the sheltered waters of Hooper Bay where it was re-filled with gasoline. The Crowley tug then towed the skiff close to shore and assisted the passengers with a safe re-boarding while the local search and rescue team welcomed them ashore. The Siku safely and successfully completed the rescue in approximately five hours before returning to its barge, which throughout the rescue waited out the gale in protected waters. Once the storm passed, the tug-barge combo continued its business along the Yukon River.

“We are proud of the professionalism of Captain Isaac and his crew,” said Greg Pavellas, director, marine operations. “Crowley has a longstanding relationship with the people of Alaska and we were happy to put our safety and rescue training to work in order to lend a hand to those men who were in dire need.”

Crowley’s tug Siku was designed for utilization with oil barges in the coastwise and river trades of Western Alaska.  Its stern configuration shrouds the propellers in tunnels, enabling it to work in very shallow drafts.  The tug measures 85 feet long and is powered by two Caterpillar engines providing 1,248 horsepower and a total bollard pull of 25,000 pounds.

Crowley continues to position itself as a leader in the Alaska fuel industry, providing transportation, distribution and sales of petroleum products to more than 280 communities across Alaska. Crowley supports the energy industry on the North Slope with summer sealifts of large production modules and various marine transportation services. At the southern terminus of the trans-Alaska oil pipeline, Crowley provides tanker escort and docking services in Valdez Harbor and Prince William Sound for Alyeska Pipeline Service Company’s Ship Escort/Response Vessel System, utilizing some of the most technologically advanced and powerful tugboats in the world. To learn more about Crowley in Alaska, visit: www.crowleyalaska.com.