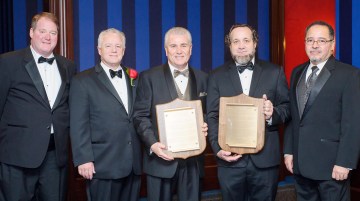 The mariners were recognized for their December 2011 rescue of the seven-member crew of the M/V Florece, which sank about 250 miles southwest of Land’s End in the Bay of Biscay, near the United Kingdom following a collision with the tanker M/V Afrodite.  Accepting the award on behalf of the ship’s officers and crew was Capt. Christopher Hill, master on the M/V Ocean Titan.

The account of the incident provided by the USS said the collision caused the Florece to sink to the ocean floor within an hour, causing the crew of seven to take to lifeboats. Shortly thereafter, the crew of the M/V Ocean Titan received the distress call and, upon arriving on scene, launched rescue operations. The crew faced gale-force winds and 12- to 14-foot seas, and had a full load of cargo. To ensure the crew’s safety, Hill decreased the vessel’s speed to prevent broaching as he approached, and then idled near the life raft. He used the engines and rudder to block the swell and minimize roll, moving close enough to pull the survivors on board from the raft using a heaving line.

“The Ocean Titan crew saved lives, while demonstrating proficiency and devotion to duty in keeping with the highest traditions of the sea,” wrote the USS in its account of the rescue.

“On behalf of everyone at Crowley, we want to commend crew of the Ocean Titan for their truly heroic act,” said Mike Golonka, vice president, ship management. “Capt. Hill and his crew showed extraordinary skill to ensure the safety of their own lives while fighting through extreme weather to rescue their seven fellow mariners. Without the crew’s bravery, those men may not be alive today.”

The M/V Ocean Titan is operated by Intermarine LLC through its U.S.-flag affiliate, US Ocean LLC, as part of its U.S.-flag heavy-lift service. Crowley began managing vessels for Intermarine in October 2011, including the technical management of the M/V Ocean Titan in April 2012. This U.S.-flag, heavy-lift/multipurpose cargo vessel operates around the world and is 393 feet long with a gross tonnage of 7,252.