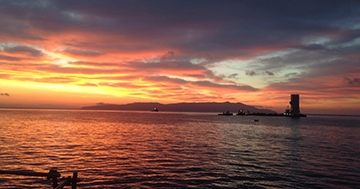 All sponsons now in position. Technicians set to start testing all systems before refloating the wreck.

(Isola del Giglio, Italy; July 3, 2014) – Installation of the last sponson, P1, on the port side of the wreck of the cruise ship Costa Concordia has been completed as planned this afternoon. Now, ahead of authorization from the Monitoring Observatory, technicians can start to test all the systems for the final refloating of the Concordia.

“Following installation of the last sponson, we can start the countdown to refloating and final departure of the wreck from Giglio Island,” said Costa Crociere CEO Michael Thamm.“Now all our energies are focused on the successful conclusion of this unprecedented engineering challenge to respect a precise commitment: remove the Concordia wreck as soon as possible, in compliance with the highest environmental and safety standards.”

A total of 30 sponsons have been positioned on the two sides of the Concordia. When the refloating operation begins, the sponsons will be gradually emptied of ballast water by means of a pneumatic system thereby providing the necessary buoyancy to refloat the wreck. At the end of this operation the wreck will have a draft of approximately 18.5 meters. The Concordia will then leave Giglio Island and be taken to Genoa, for dismantling and recycling.

The Concordia wreck was rotated to a vertical position via successful parbuckling operation in September thanks to the efforts of Crowley Maritime subsidiary Titan Salvage and partner Micoperi.