More Than 34,000 Tons of Grain Safely Discharged to Shore Over Surf Zone

Crowley Maritime Corp. subsidiary TITAN Salvage, based in Pompano Beach, Fla., and its partner T&T Salvage, a maritime emergency and salvage company based in Galveston, Texas, recently completed a challenging wreck removal project off the coast of Chile. The job, which involved the removal and scuttling (the process of strategically sinking a shipwreck) of a grounded bulk carrier on Llolleo Beach, required the use of unique, ship-to-shore equipment – such as an aerial téléphérique and a pneumatic pontoon system, TITAN’s linear hydraulic chain pullers and T&T’s high capacity pumping units – as well as ingenuity and teamwork to achieve success.

The vessel ran aground last August in Chile, approximately 1.5 miles south of the Port of San Antonio, Chile, and nearly 300 meters from the high-water mark, while carrying more than 34,000 tons of grain cargo. TITAN and T&T Salvage were contracted after the failed attempts of previous salvors led to a constructive total loss of the vessel. The only access to the casualty was from a narrow beach 300 meters away, across a constantly shifting seabed. As the project progressed over the course of five months, the mouth of a nearby river shifted so much that the salvors’ equipment staging point became completely inundated with water and had to be relocated.

In order to discharge the casualty, TITAN and T&T constructed an aerial téléphérique, or cable car, between the wreck and a 500-tonne crawler crane on the beach, allowing the salvage team to transport the grain from the wreck to the beach. Portions of the grain cargo were spoiled, which created a serious hydrogen sulfide (H2S) hazard aboard the ship and at the transshipment area on the beach. H2S is an extremely toxic and highly combustible compound. To mitigate the risks, TITAN and T&T hired a marine chemist specializing in salvage operations to advise the salvage master on ways of protecting on-site personnel and equipment as the project progressed.

Showcasing the team’s ingenuity even further, the TITAN-T&T duo designed and fabricated a shallow-draft, flat-deck barge – the pneumatic pontoon system – to transport heavy equipment between the shipwreck and the beach, as well as assist in the discharge of the grain. 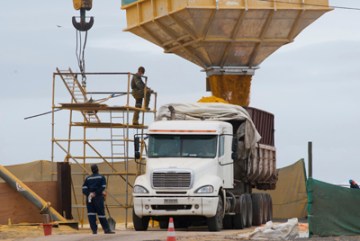 While the cargo was being removed via aerial téléphérique, six of TITAN’s pullers, which each have a 300-metric ton capacity, were installed on the stricken vessel’s bow. Connected to the pullers were six, high-holding anchors using approximately 5,000 meters of three-inch chain. The crew of Smith Maritime’s tugboat Rhea laid the anchors and made the connections to the pullers despite extremely challenging surf conditions. This elaborate network of anchors, wires and chains, coupled with the power of the hydraulic pullers, generated a maximum pulling force for 1,000 tons, helping the TITAN and T&T salvage team to later pull the vessel off the beach and refloat it in deeper waters.

In April, after approximately five months of extremely difficult work, the vessel was deballasted using T&T’s high-capacity pumping units, pulled from the beach and successfully refloated.  The vessel was then cleaned, and safely scuttled, in Chilean waters at a position designated by the local maritime authorities, approximately 40 miles offshore.

“The challenges to the salvage teams attempting projects of this kind all around the world are widely varied and can be extremely daunting,” said TITAN’s Gordon Amos, manager of the project. “It is always worth remembering that successful marine salvage and wreck removal – the end product of all our efforts – does not take place on a computer screen, or spread sheet or at a conference table. It is carried on by teams of trained and dedicated people doing heavy, sometimes dangerous, demanding tasks for long hours in the dark and the cold and the wet without complaining.”

“It is all about the salvors,” said TITAN’s Rich Habib, Managing Director, “The combined TITAN-T&T salvage team, along with the captain and crew of the Rhea, did a tremendous job overcoming adversity and completed the removal of this significant wreck with minimal environmental impact as opposed to causeways and dredging suggested by other salvors.”

“The success achieved by the TITAN-T&T Salvage team has clearly shown that professional salvage companies can cooperate efficiently and deliver results beyond expectations of all stakeholders.  We hope other Salvors follow the example we have set,” stated President Mauricio Garrido, T&T Salvage.

The work done by the 50-person TITAN-T&T Salvage team was accomplished within the established schedule and contract price, as well as to the full satisfaction of the local authorities.

About TITAN Salvage
TITAN, a wholly owned subsidiary of Crowley Maritime Corporation, is a worldwide marine salvage, emergency response and wreck removal company based in Pompano Beach, Fla., that has performed more than 450 salvage and wreck removal projects since 1980, including some of the most technically demanding projects ever undertaken. The company also has offices and equipment depots in the UK, Singapore & Australia. TITAN responds to vessel emergencies around the world and is able to mobilize a worldwide network of expert salvage professionals and specialized, portable equipment within hours of activation. TITAN is accessible 24 hours a day through the company’s main dispatch telephone number, +1-954-545-4143. Additional information about TITAN may be found at www.titansalvage.com.

ABOUT T&T SALVAGE LLC
Through a strong relationship with T&T Marine Salvage, founded in 1957, T&T Salvage was formed as a standalone company designed to respond to the emergency response needs of the maritime and petrochemical industries. T&T controls one of the largest fleets of floating salvage support assets and state of the art, portable, emergency response equipment along with an umblemished response record of more than 1,500 response operations.  Primary response bases in the Americas and Singapore coupled with strategic global partnerships allow T&T Salvage to operate one of the most extensive casualty response networks in the world. In the United States, the pre-staging of state of the art fly-away equipment, such as firefighting systems, inert gas and nitrogen generators, ship-to-ship (STS) pumping systems and diving systems give T&T Salvage a unique fast response capability.  www.ttsalvage.com