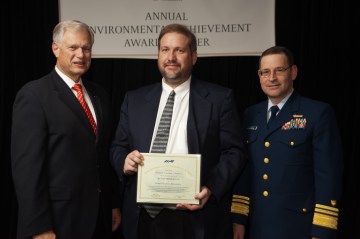 (JACKSONVILLE, Fla., November 30, 2011) – Crowley Maritime Corporation’s continued focus on environmental preservation and protection was recently recognized by the Chamber of Shipping of America (CSA) in Washington, D.C., with certificates of environmental achievement for 92 vessels that are owned and/or operated by Crowley businesses.

In total, 1,181 ships and 71 companies were honored. Crowley owns or operates 47 of the 241 vessels that have logged more than 10 years each of environmental excellence.

“Safety, which includes environmental protection, is our company’s most important core value,” said Tom Crowley Jr., chairman, president and CEO. “I am extremely proud of the men and women here at Crowley who are providing leadership in this area by not only taking responsibility for their own safety, but who are also safeguarding those around them, our customer’s cargo and the environment.”

Joseph J. Cox, president of CSA said, “These awards celebrate the dedication to environmental excellence of our seafarers and the company personnel shoreside who operate our vessels to the highest standards. In today’s world, it seems our industry only gets front-page news when spills or other environmental problems occur. It is encouraging to see how many vessels go for years achieving environmental excellence. It should be clear to the American public that we in the maritime industry take our stewardship of the marine environment very seriously.”

Each year the awards are open to all owners and operators of vessels that operate on oceans or inland waterways. A list of the vessels that received the 2011 Environmental Achievement Award is also posted on CSA’s website. 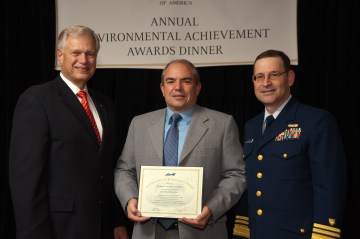 The following is a list of vessels owned or operated by Crowley, or one of its subsidiaries, that received environmental excellence awards from the CSA: