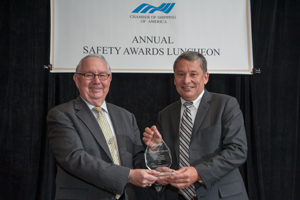 (NEW ORLEANS, La., May 29, 2013) ­– Seventy-three Crowley Maritime Corporation vessels received Jones F. Devlin Awards for their commitment to operational safety from the Chamber of Shipping of America (CSA) at the 2012 Annual Safety Awards Luncheon in New Orleans, La. Each year the CSA grants Devlin Award certificates to manned merchant vessels that have operated for two or more years without incurring a Lost Time Injury (LTI), specifically highlighting the skills and dedication of crew members who are responsible for safe vessel operations.

By 2012, Crowley vessels had collectively logged nearly 400 years of safe operations, by Devlin Award standards.  Also, six additional Crowley vessels were recognized for their safe 2012 operations, bringing the number of awarded vessels up to 73. Crowley’s Valdez Star, the company’s longest standing award winner has operated for 22 years without an LTI. Like all Crowley vessels, the Valdez Star consistently performs above and beyond industry safety standards.

“As the company’s No. 1 core value, safety is always in the forefront of our minds,” said Mike Golonka, Crowley vice president of ship management. “It’s very gratifying for our crews to be honored for their safety accomplishments. The Devlin Awards are but one way to recognize that Crowley seagoing employees take a personal responsibility for the safety of themselves and their fellow shipmates. We are honored to be recognized with these awards again in 2012.”

The 2012 Safety Awards Luncheon marks the 55 year the CSA has granted the Jones F. Devlin Awards. The CSA represents 37 U.S.-based companies that own, operate or charter oceangoing tankers, container ships, and other merchant vessels engaged in both the domestic and international trades and other entities that maintain a commercial interest in the operation of such oceangoing vessels.

The following lists show all vessels owned or managed by the Crowley family of companies that were recognized by CSA with the 2012 Jones F. Devlin Award including the consecutive number of years each has operated without an LTI: