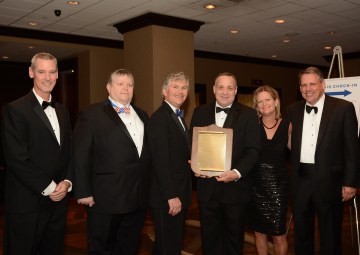 Officers and crewmembers of the Crowley Maritime Corp.-managed M/V Ocean Glory were recently honored with a 2016 Admiral of the Ocean Sea (AOTOS) Mariners’ Plaque for demonstrating heroism at sea during the United Seamen’s Service’s (USS) annual AOTOS awards ceremony in New York.

The mariners were recognized for their August 2016 rescue of an Indonesian fisherman in the vicinity of the Bali Strait while en route to Banyuwangi, Indonesia.  Accepting the award on behalf of the ship’s officers and crew was Capt. Christopher Hill, master on the M/V Ocean Glory.

The account of the incident provided by Capt. Hill said that an officer on watch reported seeing a man standing atop an overturned, outrigger fishing boat. The man, who had become stranded about 20 hours earlier after his boat capsized during a squall, was caught in a strong current and was quickly being swept out of the Bali Strait and into the open, unfrequented region of the Indian Ocean.

Ocean Glory notified the Indonesian Coast Guard and, while awaiting their assistance, attempted to pass a lifejacket via the ship’s heaving line to the distressed fisherman.  During that time, the fisherman lost his footing and fell into the water while still holding the end of the ship’s heaving line. The ship’s pilot ladder was quickly rigged and all hands on deck worked together to quickly drag the fisherman alongside the ship’s hull and to the ladder, where he was able to climb aboard before collapsing from exhaustion and dehydration.

“While being treated by the ship’s medical officer, he tearfully thanked everyone around him without knowing or needing a word of English and insisted, even in his weakened condition, on shaking everyone’s hands … he was so thankful to be alive,” said Hill.

Upon arrival in Tanjung Wangi, an Indonesian medical team transported the survivor to the hospital, but not before the ship’s crew and on-board members of the U.S. Army donated shoes, clothes and money to help speed the man’s recovery and return home.

“On behalf of everyone at Crowley, we want to commend crew of the Ocean Glory for their truly heroic act,” said Wendy MacDonald, vice president, global ship management. “Capt. Hill and his crew showed extraordinary compassion and skill to ensure their safety while rescuing a fellow mariner. Without the crew’s bravery, that fisherman may not be alive today.”

The M/V Ocean Glory is operated by Intermarine LLC through its U.S.-flag affiliate, US Ocean LLC, as part of its U.S.-flag heavy-lift service. Crowley began managing vessels for Intermarine in October 2011.  This U.S.-flag, heavy-lift/multipurpose cargo vessel operates around the world and is 171 meters long with a gross tonnage of 21,185.