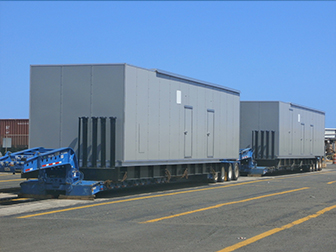 In March of 2015, Crowley’s liner services group transported two massive electrical equipment enclosures with a combined weight of 196,000 pounds to San Juan, Puerto Rico – a feat that required shifting the company’s 580-foot triple-deck barge La Princesa beside its normal berth at the Crowley terminal in Jacksonville, Fla., so that the pieces could be rolled onto the lower deck of the barge free of obstruction from the loading ramp.

Crowley was contracted by ATS International (ATSI) for the ocean transportation of the 12-foot wide, 16-foot tall, 63-foot long enclosures, which contained generating equipment. ATSI handled the over-the-road transportation and delivered the enclosures to the port on over-length, four-axle specialty trailers. But, once delivered, the cargo was too large to be loaded onto the barge at its normal berth. Additionally, the lanes within the cargo trailer weren’t wide enough for the oversized load.

To overcome the challenges, Crowley’s tug Sentry pushed the barge 100 feet beside its normal berth, where it was secured to the dock with wires and chains. The barge was then ballasted down to match the dock height while two contracted harbor tugs pressed against it on opposite sides at 90-degree angles to hold it in place. With the barge and dock level, the trailers were backed onto the vessel. Wood matting was laid in two trailer lanes prior to loading to create lanes large enough to accommodate the width of the trailers. Altogether, the cargo took up eight trailer spaces front to back on one side of barge.

“Crowley specializes in customized Roll-On / Roll-Off (Ro/Ro) solutions like this for project customers,” said Doug Walker, director, port operations, Jacksonville. “We assess all aspects of the transfer against the combined weight and dimensions of the cargo and assign the proper method of conveyance to get the job done. The joint port operations team strives to do this work right the first time, every time, taking into account all of the variables we possibly can in achieving success.”

Crowley has been serving the Puerto Rico market since 1954, longer than any other carrier in the trade. The company, with nearly 200 Puerto Rico employees, is also the No. 1 ocean carrier between the island commonwealth and the U.S. mainland with more weekly sailings and cargo carried annually than any other shipping line. Crowley is currently building two new LNG-powered container ships to be deployed in the trade in 2017.