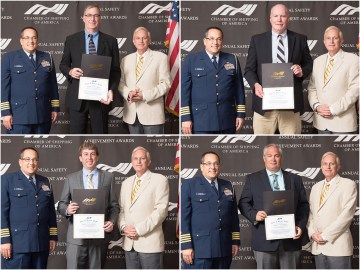 Eighty-two Crowley Maritime Corporation owned or managed vessels recently received the Chamber of Shipping of America (CSA)’s annual Jones F. Devlin Awards in recognition of their outstanding safety records in 2017. Each year the CSA grants Devlin Award certificates to manned merchant vessels that have operated for two or more years without incurring a lost time injury (LTI), specifically highlighting the skills and dedication of the crewmembers responsible for safe vessel operations.

Crowley’s 2017 Devlin Award-worthy vessels together have achieved an impressive total of 613 years of service without an LTI representing a diverse fleet including tugboats, tankers, articulated tug barges (ATBs), container ships and military vessels. Of the 82 awarded, 24 have gone without incident for 10 or more consecutive years, including the following notable vessels: Valdez Star, 27 years, and Gus E, MV Chief, MV Guide and Roger G, each with 19 years; MV Aku, MV Veteren, MV Vigilant and Tug Nanuq, each with 18 years; and Tug Bulwark with 15 years. Crowley’s vessels have earned Devlin Awards annually since 2005.

Additionally, eight ships received Citations of Merit, including Sea River Maritime Inc.’s Eagle Bay, which was renamed Washington following Crowley’s April 2018 acquisition of the tanker and its sister vessels Liberty Bay and SR American Progress which were also renamed to California and Oregon respectively. Eagle Bay (Washington) was recognized for its diversion in response to a distress call where a disabled sailboat was adrift in high wind and seas. The crew provided a lee for the sailboat for three days as they slowly made their way toward the coast providing fuel and provisions as needed until a U.S. Coast Guard cutter assumed the escort.

“CSA’s members are committed to safe operations and CSA’s involvement in safety is longstanding with our ongoing commitment to represent the industry, domestically and internationally, on safety issues encompassing every facet of ship operations,” said Kathy Metcalf, CSA president.  “It is only fitting that an industry so focused on safety, publicly recognizes the skills and dedication of the women and men who have enabled these many years of safe operations and who are responsible for actions in keeping with the highest traditions of the sea – aid to those in peril.”

“Safety is at the top of Crowley’s core values and strategic goals. The vessels receiving Devlin Awards exemplify this Crowley core value, because they live it every day – for themselves, their families and Crowley,” said Rob Grune, senior vice president and general manager, Crowley Shipping.

The following list shows all the vessels owned or managed by the Crowley family of companies that have been recognized by CSA with the 2017 Jones F. Devlin Award, along with the consecutive number of years each has operated without an LTI:

Pictured above are: Captain Andrew Sugimoto, Chief of Staff to RADM Thomas of the Eight USCG District and Jim Varley, Vice Chairman of the Board of Directors for the Chamber of Shipping of America with Crowley Captains (clockwise in center) Tod Doane, William Butler, Scott Davis and Robert Cope