Crowley Maritime’s TITAN Salvage subsidiary and the Italian firm Micoperi were ready to roll early Monday morning! The most recent stage of salvaging the Costa Concordia – the rotation, or parbuckling, of the ship to an upright postion, began during the early morning hours on Mon., Sept. 16. The parbuckling phase was completed late Monday night (EST)/early Tuesday morning (Italian time).

Summary of the Costa Concordia Salvage Job
The cruise ship Costa Concordia partially sank in Jan. 2012 after hitting a reef off the Italian coast and running aground at Isola del Giglio. Since then, Crowley Maritime Corporation’s marine salvage and wreck removal subsidiary, TITAN Salvage, based in Pompano, Fla., has worked closely with partner Micoperi, an Italian company specializing in underwater construction and engineering, to refloat the wrecked cruiseliner and tow it away to a port, where it will be scrapped.

To read more about this impressive job, check out Crowley’s most recent issue of Connections Magazine.

Watch the recent “60 Minutes” documentary for an inside look at the salvage efforts surrounding the Costa Concordia.

“Parbuckling” is the technical term for rotating or rolling a stricken vessel upwards in order to return it to a vertical position. Watch a video that demonstrates the parbuckling process here.

Parbuckling the Costa Concordia is a very unique engineering feat because it is the largest capsized passenger ship in history (approximately 300 meters in length and 114,000 gross tonnage) and because of its position.

A great article that describes the science and engineering behind this parbuckling project can be viewed online here. 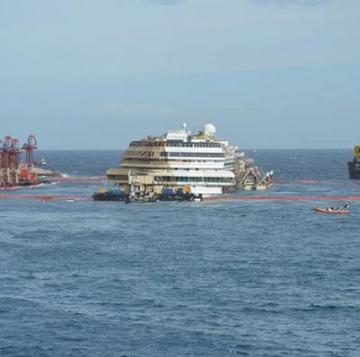