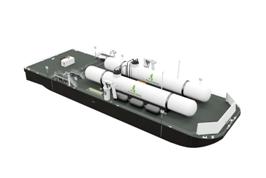 (SEATTLE; February 24, 2014) ­–Jensen Maritime, Crowley Maritime Corp.’s Seattle-based naval architecture and marine engineering company, has been awarded a contract to design some of the first liquefied natural gas (LNG) bunker barges in the U.S. for customer LNG America LLC, a Houston-based LNG fuel supply and distribution company. Currently no LNG bunkering barges are in operation in American waterways and these vessels will be among the first to be developed and built, marking a significant step in LNG America’s build-out of LNG bunkering infrastructure along the U.S. Gulf Coast and in delivering a new clean fuel to the maritime industry.

The vessels, which are expected to deliver in late 2015, have an initial planned capacity of up to 3,000 cubic meters of LNG.  Once in operation, the bunker barges will serve the dual purpose of moving LNG from LNG America’s Louisiana supply source to coastal-based storage and distribution terminals and in directly bunkering large ships.

“Through LNG America’s LNG bunkering initiative, we plan to serve and facilitate the growing marine demand for LNG,” said Keith Meyer, CEO of LNG America. “LNG America sees the demand for marine LNG to be robust as long as LNG can be made available to the maritime industry on a reliable, dependable and cost-competitive basis. Our mission is to deliver competitively priced LNG as fuel where needed, when needed and in the quantity needed.”

“The significance of this agreement is not only incredible news for the marine industry, which struggles with whether to develop LNG infrastructure or vessels first, but also for companies along the U.S. Gulf that hope to replace their traditional vessels with cleaner, more efficient LNG-powered ones,” said Jensen’s Johan Sperling, vice president. “We are thrilled to be working with LNG America in the development of its marine infrastructure and also in providing a green fuel source to this important region. Jensen is on the leading edge when it comes to LNG vessel design and we look forward to serving LNG America and other customers with this valuable service.” 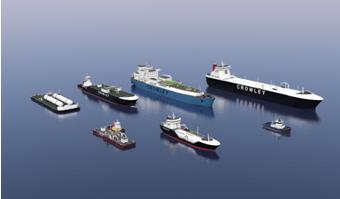 Jensen first produced prototype designs for LNG vessels in 2008. Additionally, Jensen has developed designs for a 100’ x 40’ LNG tugboat and is currently working on several other prototype designs of LNG bunker vessels, harbor tugs, ATBs, container ships and tankers, along with inland vessels for a variety of customers in the U.S.

LNG America was formed last July to develop LNG distribution infrastructure that serves not only the marine market but the burgeoning use of LNG in the oil and gas, rail, mining and heavy-duty trucking markets as well.  These markets have emerged due to the fuel’s price competitiveness resulting from the abundant U.S. natural gas reserves.

LNG facts from the Center for Liquefied Natural Gas (CLNG):
LNG, or liquefied natural gas, is natural gas that is cooled to -260° Fahrenheit until it becomes a liquid and then stored at essentially atmospheric pressure. Converting natural gas to LNG, a process that reduces its volume by about 600 times allows it to be transported. Once delivered to its destination, the LNG is warmed back into its original gaseous state so that it can be used just like existing natural gas supplies. When returned to its gaseous state, LNG is used across the residential, commercial and industrial sectors for purposes as diverse as heating and cooling homes, cooking, generating electricity and manufacturing paper, metal, glass and other materials. LNG is not stored under pressure and it is not explosive. LNG vapors (methane) mixed with air are not explosive in an unconfined environment. When exposed to the environment, LNG rapidly evaporates, leaving no residue on water or soil.

About Jensen Maritime
Seattle-based Jensen Maritime Consultants, Inc. is a full service naval architecture and marine engineering firm owned by Crowley Maritime Corporation. With more than 50 years experience working around the world, Jensen offers a diverse range of consulting, design and engineering services. The company is a recognized leader in the design of many types of workboats and offshore vessels and has built a favorable reputation over a long history of successful designs and conversions – always paying close attention to the entire design lifecycle. Jensen’s services include vessel design, construction management, production engineering, project management and salvage engineering as well as on-site consulting services and on-location assistance anywhere in the world. Additional information about Jensen may be found at www.jensenmaritime.com.

About LNG America
LNG America LLC is a Delaware limited liability company formed in 2013, based in Houston Texas, with the objective of providing a highly reliable source of LNG in quantities required by emerging high horsepower LNG fuel markets including marine, rail, E&P, mining, and trucking.  Additional information about LNG America may be found on the company’s website at www.LNGAmerica.com.