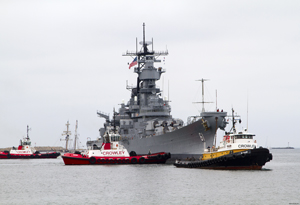 WHAT:
The USS Iowa, one of the most powerful battleships of all time, will make her final journey through the main channel of the Port of Los Angeles to her permanent home, Berth 87, near the World Cruise Center in San Pedro, Calif. Crowley Maritime Corporation will use four of its Harbor class tugs to tow the 887-foot-long ship, which will be escorted by fire boats.

After departing Berth 51-52, where it is presently docked, the tugs and ship will head bow first up the main channel, bypassing Berth 87 and then transiting under the Vincent Thomas Bridge. Next it will pivot in the turning basin and cross under the bridge again. Then it will travel down the main channel and dock on its starboard side at Berth 87. The ship’s final voyage will cover 3.4 nautical miles in an estimated 1.25 hours.

Crowley’s 7,200-HP tugboat Warrior recently completed the safe tow of the historic USS Iowa to Los Angeles from San Francisco after passing under the historic Golden Gate Bridge amid a festive celebration of the bridge’s 75th birthday. The Pacific Battleship Center, which owns the ship, will celebrate its public grand opening as an interactive naval museum on Saturday, July 7.

WHO:
Approximately 800 guests have been invited to be aboard the ship as she is shifted to her final destination. Invitees are early financial supporters (Plankowners) and other donors, USS Iowa veterans, news media and elected officials, such as Los Angeles Mayor Antonio Villaraigosa.

“I look forward to welcoming the USS Iowa battleship to Los Angeles as it is towed to its final berth at San Pedro’s Terminal 87 on June 9th,” says Mayor Villaraigosa. “We are honored to be the home of the USS Iowa and are eagerly anticipating its opening as an interactive naval museum. The ‘Battleship of Presidents’ will have a place of honor in our city.”

“We are pleased to assist in the safe delivery of this historically significant vessel to its final berth in Los Angeles,” said Andrew Gauthier, port captain, Crowley. “It is an honor for our team and company to have the privilege of caring for the USS Iowa on her journey to her new home.”

Before the ship is underway, Pacific Battleship Center President Robert Kent will welcome the guests, the crew will man the rails and the lines will be cast off. Upon USS Iowa’s arrival at her new home, there will be a welcoming program on the aft flight deck. Guests will then depart from the ship, which is known as the Battleship of Presidents because it hosted Franklin D. Roosevelt, Ronald Reagan and George H.W. Bush.

WHEN:
On Saturday, June 9, 2012, the day’s activities are scheduled as follows:

Members of the media covering the events from the ship will not be allowed to exit the ship until all guests are depart at 5:30 p.m. Journalists who do not wish to be onboard the ship to cover these events may obtain credentials and parking passes as described below. Members of the media will be permitted on the dock at Berth 87. The main entrance to Berth 87 is through the World Cruise Center, at Harbor Boulevard and Swinford Street.

WHERE:
Berth 87
Los Angeles, Calif.
Main entrance is through the World Cruise Center, at Harbor Boulevard and Swinford Street.

IMPORTANT INFORMATION ABOUT CREDENTIALS, IDENTIFICATION, SECURITY AND PARKING
Members of the media should park at Berth 87 and then take shuttle buses, which will begin running at noon, to Berth 51-52 to board the ship. Media must present a parking pass to enter the parking lot via the World Cruise Center. Media passes are available in advance by contacting Bob Rogers at 858-349-3041 or 858-349-3821 or media@labattleship.com no later than 4:00 p.m. (PDT) on Friday, June 8.

The following information must be supplied for each media participant: Full name, phone number, email address and media outlet. Credentials and parking passes are not transferrable. Media with heavy equipment may drive to Berth 51-52 to drop off their gear and check in, then return to Berth 87 to park and take a shuttle bus back to Berth 51-52. Main entrance to Berth 87 is through the World Cruise Center, at Harbor Boulevard and Swinford Street.

On June 9, all members of the media will need to present a photo ID that matches the Coast Guard manifest. Purses and bags will be checked by security, so it’s advisable to carry as few items as possible. Media may conduct interviews on the ship.

Also on June 9, the U.S. Coast Guard will be enforcing a 100-yard Captain of the Port Safety Zone encircling the USS Iowa while the ship is in transit and while moored. No vessel may approach the USS Iowa within this distance without permission of the U.S. Coast Guard or the assisting local law enforcement agencies. For more information regarding the Safety Zone, contact BM1 Guy Langman at 310-521-3867.

Public ticket sales for the July 7 grand opening and dates beyond have begun. For more information about the USS Iowa, visit www.pacificbattleship.com.