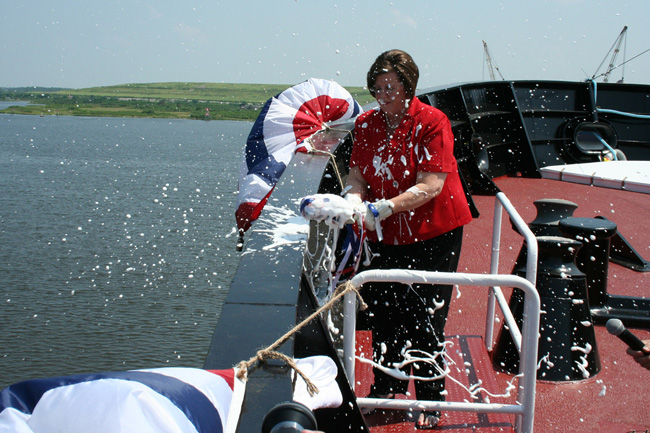 (Pascagoula, Miss., August 11, 2010) — Crowley Maritime Corporation yesterday christened the ninth in a series of 10 new 185,000 barrel ATBs at the VT Halter Marine shipyard in Pascagoula. The Innovation and barge 650-9 will be chartered to Chevron, to safely transport petroleum products throughout the Gulf of Mexico.

The newest ATB, designed by Crowley’s vessel construction and naval architecture group and built by VT Halter Marine in Mississippi, will be operated by Crowley for Chevron under a time charter agreement. Crowley already has eight, 650-Class ATB’s capable of carrying 180,000 bbls at 95 percent capacity and four 550-Class ATB’s capable of carrying 148,000 bbls at 95 percent capacity. These units are Jones Act qualified having been built in the United States, owned by U.S. Citizens and crewed by U.S. citizens. Three larger, Jones Act qualified ATB’s known as the 750-Class, which will each have a 330,000 bbls capacity, are under construction and scheduled for delivery by the end of 2012.

The new ATBs feature the latest systems technology and double-hull construction for maximum safety and reliability. Not only does the unit have the capability of transporting refined products, but it can also carry heated cargoes and easy chemicals, which require special arrangements of vents, stripping systems, pump components and tank coatings above that normally required for product carriers.

All of Crowley’s ATBs are built under the ABS SafeHull program for environmental protection. This program puts the vessel design through an exhaustive review to identify structural loads and strengthen the vessel structure. The 650-Class barges are 27,000 deadweight tons, 587 feet in length, 74 feet in breadth and 40 feet in depth. The fully loaded draft is 30 feet. When coupled for operation the tug and tank vessel measure 689 feet.

There is an electric cargo pump in each of the 14 cargo tanks to assure maximum cargo integrity and segregation flexibility; two anchor windlasses and associated equipment to enable the vessel to accommodate offshore mooring operations; and a vacuum system with three retention tanks to easily handle cargo changes. There is also a dual mode inert gas system and vapor collection system for maximum safety. A layer of inert gas covers products in the tanks to make the atmosphere too lean for combustion. An enhanced mooring system features 1,000-foot Spectra-type lines on split drums with a high-speed recovery rate of 100 feet per minute.

The tugs meet all SOLAS (Safety of Life at Sea) and ABS criteria, and have a foam capable fire monitor; twin fuel-efficient diesel engines; a noise reduction package; and other upgrades to increase crew comfort. The communication and navigation equipment is among the most technologically advanced in the industry today.