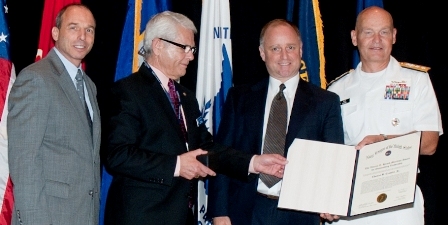 The award read in part: “He has provided exceptional service as an active participant of joint industry and Department of Defense groups working to provide strategic sealift for the United States in times of national need. During the 2010 Haiti relief efforts, Crowley Maritime worked closely with the U.S. Transportation Command to reopen cargo operations in the devastated port facilities, allowing humanitarian relief into the earthquake-ravaged country while successfully completing the largest post-disaster (cargo) lightering operation ever. The U.S. Merchant Marine and maritime industry will be forever grateful for his contributions to the maritime strength of the nation.”

The Vincent T. Hirsch Maritime Award is named for a patron of the Merchant Marine and past National President of the Navy League. This award is presented to an individual in private or public life whose efforts and/or achievements have contributed substantially to an increased public awareness of the vital role of a privately owned U.S.-flag merchant fleet, both to the United States defense establishment and to the nation’s economic well-being.