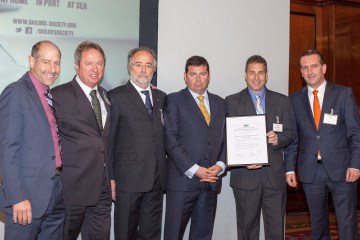 Crowley Maritime Corp.’s Houston-based subsidiary TITAN Salvage and Italian engineering partner Micoperi were recently honored with the International Salvage Union (ISU) Meritorious Service Award during the organization’s Associate Members’ Day Conference in London. The award was presented by ISU President Leendert Muller in recognition of TITAN and Micoperi’s outstanding service to the salvage industry during the successful execution of the largest single maritime wreck removal project ever to be undertaken, the Costa Concordia.

The Costa Concordia ran aground in the waters surrounding Giglio Island, Italy, in January 2012, and was parbuckled (rotated upright), refloated and towed away by the TITAN/Micoperi team in September 2014. The ship salvage was the largest, most technically demanding project of its kind in history and was carried out in full public view from the island. Complete project details can be found online here.

In presenting the award, Muller said, “It was a superbly executed job that brought credit not only to the individuals and companies involved but also to the wider salvage industry. And it therefore gives me great pleasure to make the ISU’s Meritorious Service Award to the Titan/Micoperi Costa Concordia project team, including all the men and woman who played their part.”

“It was a true privilege to accept this award on behalf of the TITAN/Micoperi team and the hundreds of people who have worked tirelessly on this project,” said Todd Busch, Crowley senior vice president and general manager, technical services, who accepted the award on behalf of the team. “The successful effort was special for so many reasons and to so many involved, including the residents of Giglio and Italy, our talented team, and the passengers who were impacted. And while we celebrate this, it is also important for those of us who represent an industry that responds to disaster to remember those who have lost their lives as a result of incidents such as this one, and that we honor and respect their families.”