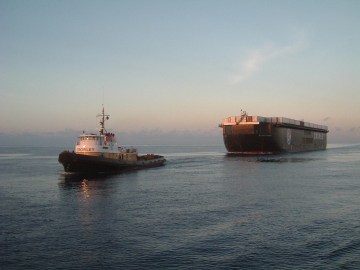 (JACKSONVILLE, Fla.; March 22, 2013) – The captain and crew aboard the tugboat Explorer, which is managed by Crowley Maritime Corp, were recently recognized by Coast Guard Rear Admiral William Baumgartner, who serves as commander of the Seventh Coast Guard District in Miami, for their humanitarian actions, unwavering determination, professionalism and skilled seamanship after they assisted a vessel that ran out of fuel 30 miles west of Providenciales, Turks and Caicos Islands, in December.

Following the incident, Baumgartner issued an official letter of thanks to Capt. Smith, expressing his sincere appreciation for the Crowley crew’s assistance. In it, he wrote: “The humanitarian actions taken by the crew of the tug Explorer are in keeping with the highest traditions of professional mariners. Please accept my personal thanks to you and your entire crew for a job well done!”

The Explorer was the third Crowley vessel to be recognized for at-sea rescues in recent months. In January, the crew aboard the Crowley-owned and -operated articulated tug-barge (ATB) Achievement/650-8 pulled a man drifting out to sea from Tampa Bay, Fla. Before that, in November 2012, the Crowley crew aboard the company-owned and -operated tugboat Guard, rescued a man struggling to stay afloat in the frigid waters of the San Francisco Bay. Both rescues were successful and resulted in lives saved.

“All of us at Crowley are tremendously proud of this crew,” said Crowley’s John Hourihan, senior vice president and general manager, Puerto Rico liner services. “The Explorer’s quick response to fellow mariners in need is a tribute to their character and training. We congratulate them and thank them for their service.”

Each of Crowley’s vessels are fully trained and prepared to respond to a variety of emergency incidents. In addition to meeting defined regulatory training requirements, the company’s crewmembers participate annually in the Crowley Safety Program, a custom training event designed exclusively for mariners. The program provides training in cold-water survival tactics, shipboard fire fighting, medical incidents and other relevant topics give the mariners the skills and confidence they need to survive in emergency situations.

The Explorer, homeported in Jacksonville, is a Crowley Puerto Rico Services tugboat that works with company-owned barges to carry cargo from South Fla. to Puerto Rico on a weekly basis.