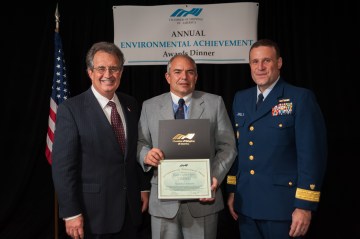 (JACKSONVILLE, Fla., Dec. 4, 2012) ­– Crowley Maritime Corporation was recently honored by the Chamber of Shipping of America (CSA) with 96 environmental achievement awards for safe vessel operations during 2012 – more than any of the other 76 maritime companies recognized by CSA. The vessels owned and/or operated by Crowley businesses qualified for the awards by operating for at least two consecutive years without any recordable environmental incidents – a testament to Crowley’s continued commitment to operational excellence with a focus on environmental protection.

“Safeguarding people and the environment is at the core of Crowley’s culture,” said John Tronti, managing director for MTL/Crowley, who accepted the awards on behalf of the company, along with Julio Custode from the Crowley-managed M/V Cape Washington. “The awards are a great reflection of our crewmembers and employees, who make this possible, and are a further indication to our customers and industry associates that we take pride in operating responsibly.”

“The Environmental Achievement Awards are a great opportunity for owners and operators to recognize the accomplishments of their mariners and shore-side staff,” said the CSA in a statement. “While the public hears of instances when there are environmental problems, they should know that this industry has an excellent record of environmental accomplishment.”

Each year, the awards are open to all owners and operators of vessels that operate on oceans or inland waterways. A complete list of the vessels and companies that received the 2012 Environmental Achievement Award is also posted on CSA’s website.

The following is a list of vessels owned or operated by Crowley, or one of its subsidiaries, that received environmental excellence awards this year from the CSA: