Since 1892, Crowley has developed a portfolio of commercial services that it easily and continuously adapts in support of the U.S. government’s operations both domestically and abroad.  The following is a small list of the company’s past experience under varying contracts servicing government customers at home and abroad.

Crowley has managed and operated ships in the ready reserve fleet for the United States Department of Transportation Maritime Administration (MARAD) since 1995.

Crowley was awarded a blanket purchase order from the prime contractor, VSE Corporation, to perform substitute custodian services for the U.S. Government.  One task order assigned was the management of the Olympiakos, pictured here after being sold at auction.

Crowley was awarded a multi-year contract to develop and implement a program to meet Alaska’s requirements for Ocean Rangers to monitor environmental and safety compliance of passenger cruise vessels in Alaskan waters.

Crowley was awarded a contract with SUPSALV, the Office of the Director of Ocean Engineering, Supervisor of Salvage and Diving, also known as 00C in the fleet, to provide multiple services for Naval Sea Command.  One of the 2010 delivery orders under that contract was to project manage the salvage and repair for an aging flattop–a vital vessel for the West Coast Fleet.

Crowley has secured a five year contract to provide land, ocean and warehouse services in Puerto Rico and the US Virgin Island as first call responder to incidents and events such as hurricanes, tsunamis, earth quakes and any disaster that could affect US interests in the region. The contract was awarded in August of 2010 and runs through 2015.

Crowley holds a contract and provides service within the USTRANSCOM Regional Domestic Contract 05, whereby the Government ships all military and military sponsored cargo by commercial ocean transportation in the Defense Transportation System (DTS) to/from Continental U.S. (CONUS) points and ports to the port of San Juan, Puerto Rico; and points and ports in the U.S. Virgin Islands, Alaska, Hawaii, Guam; and intra-island service within Hawaii, to/from Hawaii and Guam, to/from Puerto Rico and the US Virgin Islands, to/from Alaska and Hawaii/Guam, and within the US Virgin Islands.

Crowley was awarded a contract under USTRANSCOM Universal Contract 06 to provide international cargo transportation and distribution services using ocean common carriers, as defined in the Shipping Act of 1984, offering regularly scheduled commercial liner service for requirements that may arise in any part of the world, because Crowley has proven capabilities of providing ocean, intermodal, and related transportation and distribution services to support as required.

As a subcontractor, Crowley project managed the entire process to relocate the former US ship Higgins from its berth in Suisun Bay, California, to the shipyard in Mobile, Alabama, through the Panama Canal.  This project was completed in record time without incident.

Crowley recently put seven members of the Kuwaiti Navy through a 30-day training regimen to get them accustomed to safely operating and maximizing the features and performance of the first of two newly designed Z-Drive harbor tugs the Kuwaitis will take delivery of this year.  Crowley conducted the training in Seattle and Anacortes, Washington, and covered advanced fire fighting, vessel operations and engineering, safety and bridge simulator training.

The Monongahela broke loose from her moorings and drifted aground during a late fall storm in 2009.  Crowley was tasked to project manage the job of pulling the ship out of the mud, and returning her to her berth.  With the skills and knowledge of Crowley’s wholly-owned subsidary, Titan Maritime, the Monongahela was moved back where she belonged without incident.

The Military Sealift Command (MSC) fleet has aged and many of the ships have obsolete and unsupportable machinery control, alarm, and monitoring systems.  Crowley was awarded a contract to provide project management and engineering services to assist MSC’s project design team with implementing consistency in practices across the MSC fleet as it relates to the implemenation of shipwide automation, control and monitoring systems for individual and multiple ship classes and platforms. 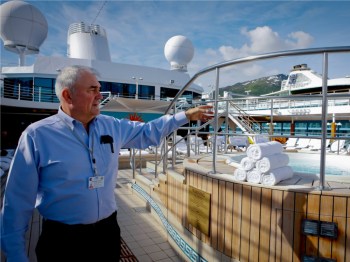